Clashes in Tunisia after journalist sets himself on fire

Abderrazek Zorgui posted a video on social media before he died on Monday, saying that he was going to set himself alight due to the difficult social circumstances experienced by him and his family. The video has since been removed.In a statement, Tunisia's national journalists' union said Zorgui died after he set himself ablaze "due to harsh social circumstances and a lack of hope."The union also condemned "the countries which have contributed to making the field of journalism a hot-bed for corruption" and added that it would be announcing a series of protests in the coming days.After Zorgui's death, demonstrators clashed with police on the streets of Kasserine in western-central Tunisia.Police used tear gas to disperse protesters whom it accused of burning tires, blocking several roads and throwing rocks, state news agency TAP reported.While authorities said on Tuesday that they have launched an investigation into Zorgui's death, as reported by TAP, the move failed to appease demonstrators who continued to protest on Wednesday evening.So far, a total of 22 people have been arrested.The past three days bear a resemblance to the case of Mohamed Bouazizi, who died after setting himself alight in the Tunisian capital, Tunis, in 2010. The incident was widely seen as being the catalyst for the Arab Spring uprisings across North Africa and the Middle East in 2011. 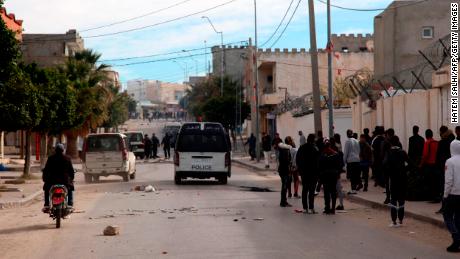 The unrest following Bouazizi's death — which spread from Kasserine to across the country — led to the toppling of the longtime autocratic leader, President Zine el Abidine Ben Ali.The country has since been regarded as a zone of relative stability in a troubled region. But while democratic progress has been made, Tunisia's economy has struggled and unemployment has remained high.Speaking on behalf of the Tunisian government, Interior Minister Hichem Fourati said he understood the reasons behind the protests this week but called on demonstrators to exercise their rights within with the law and not at night, TAP reported.

CNN's Vasco Cotovio and Livvy Doherty in London, Nada Altaher in Abu Dhabi and journalist Houda Zaghdoudi in Tunis contributed to this story.

Commentary: Droughts and dams are drying up the Mekong river