Floyd, a 46-year-old black man, died last Monday in Minneapolis. While being arrested, Floyd was held down by a Minneapolis police officer's knee for more than eight minutes. He was pronounced dead shortly after. His death, which was captured on video, sparked widespread protests across the US, with people calling for an end to police brutality against people of color. Controversial monuments, particularly Confederate monuments, have been the subject of nationwide debate since Dylann Roof killed nine African Americans in a Charleston, South Carolina, church in 2015 in an effort to "start a race war." And it flared up again after white nationalists marched in 2017 to protest the removal of a Robert E. Lee statue in Charlottesville, Virginia, where a counterprotester was killed amid violent clashes between demonstrators.Some say they mark history and honor heritage. Others argue they are racist symbols of America's dark legacy of slavery. While some cities have already made efforts to remove them, others have passed laws to protect them.Here's a look at some of the monuments that were removed in the last week.

After 22 years on the steps of Philadelphia's Municipal Services Building, a statue of the city's former mayor and police commissioner Frank Rizzo was removed from its post across City Hall in Center City early Wednesday morning, according to CNN affiliate WPVI. On Saturday, protesters appeared to tie ropes to the statue and started a fire at the statue's base.Rizzo served as Philadelphia's mayor from 1972 to 1980. During his term, Rizzo was praised by supporters as tough on crime but accused by critics of discriminating against minorities, according to WPVI."The statue is a deplorable monument to racism, bigotry, and police brutality for members of the Black community, the LGBTQ community, and many others," Philadelphia Mayor Jim Kenney said in an online statement. "The treatment of these communities under Mr. Rizzo's leadership was among the worst periods in Philadelphia's history."The statue was scheduled to be removed next year, according to WPVI. But on Tuesday, the mayor signed an order for the city managing director to immediately remove the statue, according to an online statement. Now that the statue has been removed, it will be placed in secure storage by the Department of Public Property until a plan is developed to donate, relocate, or otherwise dispose of it, the statement said.

Demonstrators at Linn Park attempted remove a 115-year-old Confederate monument during a protest on Sunday.But Birmingham Mayor Randall Woodfin arrived at the scene, telling the demonstrators he would "finish the job" for them.The city's mayor pleaded with demonstrators to disperse before police came to make arrests, adding that he understood their anger.The park houses memorials dedicated to veterans and a statue of Confederate sailor Charles Linn. 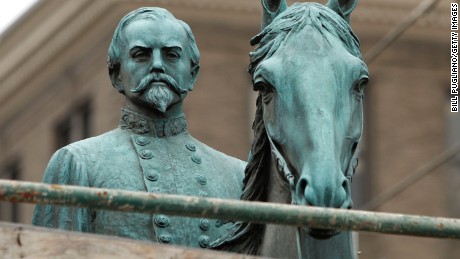 Woodfin did not specify when exactly the monument would come down."In order to prevent more civil unrest in our city, I think it is very imperative that we remove this statue that's in Linn Park," he said in a news conference on Monday.

About 90 miles south of Birmingham, demonstrators tore down a statue of Confederate Gen. Robert E. Lee that stood in front of Lee High School in Montgomery on Monday, according to CNN affiliate WSFA. The Montgomery Police Department told WSFA that four people have been charged with first-degree criminal mischief, a felony.The 112-year-old statue, was housed in two other locations in Montgomery before the grounds of Lee High School, according to the school's websiteRead More – Source

The staggering US black-white inequality in charts

The staggering US black-white inequality in charts

US military commander: On North Korea, lack of trust is the enemy