The US government is all in on coronavirus: How its still not enough

The global coronavirus crisis crashed into the United States in Washington state in January and quickly brought the richest and most powerful nation in the history of the world to its knees.

And so far, the federal response has been too small in scope and short on creative solutions to meet the greatest challenge since World War II.

The nation needs upwards of 30 million tests per week to properly track the virus, health experts say. The country is only testing around 1 million a week now. It could take a public health army of more than 100,000 to track and trace those carrying the virus. There are only a few thousand so far.

It may take a trillion dollars just to keep small businesses alive, based on the current burn rate of the federal small business rescue program. Congress, mostly stuck outside of Washington with no capacity to legislate remotely like it is stuck the 19th century, appeared to seal a deal $484 billion deal Tuesday that would bring the total for small business up to around $670 billion. In total, the U.S. fiscal response badly trails that of European nations like Germany. Crashing oil prices threaten a key piece of the economy and most of the tools we have are meant to address the opposite problem: an oil shortage and soaring prices.

Unemployment benefits — while expanded and enhanced — do not come close to making up lost income for millions of Americans in the way that European nations with robust social safety nets can accomplish. Gaps in the U.S. health care system — an issue of partisan fighting for decades — are now fully exposed. The U.S. Federal Reserve has pledged to inject what could amount to trillions of dollars into the coronavirus response, but it too may need to do more to fight a potentially large rise in mortgage defaults.

The battle over coronavirus testing has often turned into bitter shouting matches between Trump and many state governors.

And a bitterly polarized political and media culture — born at least two decades ago and jacked up on steroids during the Donald Trump era — has left governors battling the president and citizens battling each other over how and when everyone should emerge from their bunkers and begin to engage in something resembling normal life.

“The United States was once known for its can-do culture. We built the Panama Canal and we put a man on the moon,” said historian Douglas Brinkley of Rice University. “And now we cant get a swab or a face mask or a gown and we have no real chain of command. And we have two Americas, a Republican one and a Democratic one, and they wont collaborate. We are not leading in the pandemic response, we are trailing other countries by a long shot. This is a crippling blow to Americas prestige around the world.”

The U.S. is likely to bounce back from the coronavirus pandemic. Jobs will return and normal life will eventually resume. But that process could take much longer unless the government response accelerates.

Here are just some of the ways the U.S. is struggling to meet the challenge posed by the coronavirus.

The United States is testing just over 1 million samples per week — a number that is far below what outside public health experts say is needed to safely consider lifting social distancing measures.

A complex supply chain for supplies needed for coronavirus testing — ranging from swabs to chemicals needed to prepare samples — is under global pressure. The Rockefeller Foundations testing plan calls for an immediate expansion of testing to 3 million per week, arguing 30 million per week will be ultimately needed.

Even President Donald Trumps former FDA commissioner, Scott Gottlieb, estimated far more testing is needed to understand the spread of disease in the country. “At the current levels of infection, to achieve a positivity rate of 1%, we would need to have conducted 70+ million covid tests. To date, weve conducted close to 4 million,” he tweeted Monday.

The battle over coronavirus testing has often turned into bitter shouting matches between Trump and many state governors. Trump says that the U.S. has enough tests to begin to reopen safely in many states, but governors who have to make the decisions want to test much more of the population to feel safe.

Governors have struggled with demanding more tests from the federal government while being careful not to anger Trump.

Maryland GOP Gov. Larry Hogan has clashed with Trump over testing and recently made a deal to buy 500,000 kits from South Korea.

“If there was an easier way, we certainly wouldve taken it,” Hogan said on MSNBCs “Morning Joe” on Tuesday. “The president said that the governors are on their own and they should really focus on getting their own tests, and thats exactly what we did.”

The U.S. also needs a robust army of public health workers to meticulously track down everyone who might have been exposed to an infected person. Before the pandemic, state and local health departments employed fewer than 2,000 disease hunters to protect against outbreaks.

But health experts say the country will need anywhere between 100,000 and 300,000 contact tracers to prevent new hot spots from exploding after social distancing measures are pulled back.

Its a difficult job, with little room for error. And the next phase of federal stimulus may not happen until Congress comes back in session, leaving the budget for such a public health army in doubt. 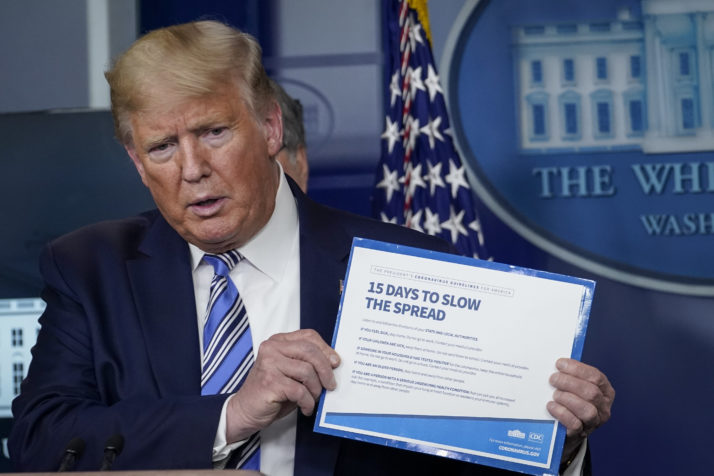 States and cities are quickly trying to enlist public employees, graduate students and furloughed health workers to interview newly infected patients to identify their recent contacts and get those people to self-quarantine for two weeks. Some have begun to hire by the hundreds, but the piecemeal efforts fall short of a coordinated national strategy thats helped prevent worse outbreaks in places like Taiwan and New Zealand.

The U.S. economy entered rapid free fall in March as Covid-19 cases spiked and states began issuing stay-at-home orders. Thus far, at least 22 million Americans have filed for initial unemployment benefits, essentially wiping out all the job gains of the last ten years. Most economists estimate the April jobs report will show tens of millions in total job losses and an unemployment rate of 20 percent or more.

The federal government responded in the $2.3 trillion CARES Act to send stimulus checks of up to $1,200 per citizen and Congress also approved an unprecedented expansion of unemployment benefits, giving many workers assistance equal to their paychecks. But many newly eligible people, including gig workers , have found themselves in an endless queue of jammed phone lines as state offices struggle to deal with the influx.

In cities across the country, thousands of people with nowhere left to turn braved mileslong lines at food pantries, conjuring images of bread lines during the Great Depression. Unlike many other western Democracies, the U.S. gives temporary loans — not direct payments — to small businesses in order to keep workers on payroll.

Congress has thus far approved $350 billion in emergency loans for small business and is poised to add $320 billion more, getting closer to the $1 trillion many banks and small business owners say will be necessary to prevent even more widespread job losses.

Banks and small businesses owners fear even this new money set aside for them will run out in just a few days. And as a percentage of the total economy, the U.S. still lags far behind other nations including Germany, Italy, France, the U.K. and Japan in terms of injecting federal funds into the system to battle the crisis, according to data compiled by Deutsche Bank.

Traditionally, the U.S. has fought the opposite problem — rising oil prices driving up gas costs and damaging consumers ability to spend on other things.

Small business owners may be eligible for forgiveness if they spend 75 percent of their Paycheck Protection Plan loan on worker salaries, but theres increasing doubt that it will be enough for businesses to weather the pandemic, given that the loans only last eight weeks. And businesses who didnt already get loans are stuck waiting for Congress to replenish the fund, which ran out of money last week.

There have also been multiple problems with the rollout of the loans, and some small businesses aresuing large banks, saying the financial institutions favored making larger and more lucrative loans over smaller ones. European countries, meanwhile, have far more robust efforts to keep workers attached to their jobs, which economists say will be key to speeding up a recovery when the contagion lifts.

The Tory government in Britain pays business owners 80 percent of their workers wages to keep them on payroll, up to a monthly cap of 2,500 pounds. France, Spain and the Netherlands have taken similar steps, and Germanys “KuRead More – Source

Race-by-race tips and preview for Sapphire Coast on Wednesday

Healing slow to come for some after Humboldt crash

#Stayhome guide for Thursday: Check out Vesak Day celebration photos from the past, try some comfort Korean food and more