The department should consider releasing all immigrant detainees who don't pose a risk to public safety, the doctors argue, before it's too late.There's an "imminent risk to the health and safety of immigrant detainees" and to the general public if the novel coronavirus spreads in ICE detention, Dr. Scott Allen and Dr. Josiah Rich wrote in a letter sent to lawmakers Friday.The doctors, contracted experts for the Department of Homeland Security's Office for Civil Rights and Civil Liberties, say they're "gravely concerned" about the risks the novel coronavirus poses."They are essentially the medical experts for DHS, who want to make sure they're sounding the alarm and weighing in on this significant threat to public health," said Dana Gold, senior counsel at the Government Accountability Project. The organization, known for its work protecting whistleblowers, is representing the doctors and released their letter to CNN. The doctors are co-founders and co-directors of the Center for Prisoner Health and Human Rights."They are not speaking as DHS, but they are speaking in their capacity as medical experts for DHS who have a duty to warn," Gold said.The doctors could not immediately be reached for comment.

At least one ICE staffer has tested positive for coronavirus

The doctors' letter comes a day after ICE informed members of Congress that a member of the medical administrative staff of an ICE detention center in Elizabeth, New Jersey, tested positive for coronavirus, fueling already growing fears about a potential outbreak in that facility and others in ICE's sprawling detention system."Currently, no ICE detainees or other staff are symptomatic for COVID-19 at this facility," ICE said in a statement obtained by CNN. "Despite the personal risk to themselves, the dedicated professionals of ICE — including the medical professionals at (ICE Health Service Corps) continue to carry out their duties to keep the public and our detainees safe during this unprecedented pandemic."This week numerous immigrant advocacy organizations and human rights groups have been pushing for ICE to release detainees in its custody as the virus spreads. Some are asking for the agency to release detainees with underlying medical conditions. Others are pushing even further, saying all detainees should be let out.The idea of releasing detained immigrants as coronavirus spreads has drawn criticism from organizations who support the US government's crackdown on illegal immigration. Some have argued the US should instead increase the pace of deportations to decrease the number of people detained.Asked for a response to the concerns raised in the doctors' letter, an ICE spokeswoman pointed to the site where ICE is posting coronavirus updates, which describes the health and safety of detainees as a top priority and details how the agency plans to mitigate the spread of the virus."ICE epidemiologists have been tracking the outbreak, regularly updating infection prevention and control protocols, and issuing guidance to ICE Health Service Corps (IHSC) staff for the screening and management of potential exposure among detainees," the website says. "ICE continues to incorporate CDC's COVID-19 guidance, which is built upon the already established infectious disease monitoring and management protocols currently in use by the agency. In addition, ICE is actively working with state and local health partners to determine if any detainee requires additional testing or monitoring to combat the spread of the virus."The Department of Homeland Security did not immediately respond to a request for comment.The doctors' letter raises many of the same concerns advocates have been highlighting, such as the fact that the "social distancing" practices that authorities around the world say are essential to slowing the spread of coronavirus are essentially impossible in immigrant detention.The letter also highlights an issue that hasn't gotten as much public attention: Outbreaks inside detention facilities, they say, pose serious risks to the general public as well."It's much bigger than just what happens to the immigrants in detention," Gold said.

In their letter, the doctors outline what they describe as a "tinderbox scenario." 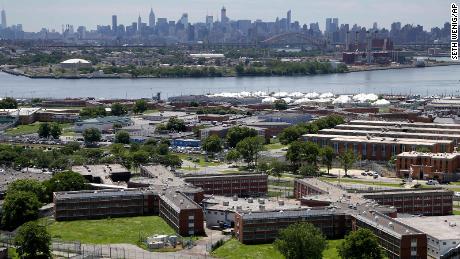 "As local hospital systems become overwhelmed by the patient flow from detention center outbreaks, precious health resources will be less available for people in the community," the letter says. "To be more explicit, a detention center with a rapid outbreak could result in multiple detainees — five, ten or more — being sent to the local community hospital where there may only be six or eight ventilators over a very short period."As they fill up and overwhelm the ventilator resources, those ventilators are unavailable when the infection inevitably is carried by staff to the community and are also unavailable for all the usual critical illnesses (heart attacks, trauma, etc)."In an alternate scenario, the doctors write, detainees are released from "high risk congregate settings" and the volume of patients sent to community hospitals would level out. "In the first scenario, many people from the detention center and the community die unnecessarily for want of a ventilator," the letter says. "In the latter, survival is maximized as the local mass outbreak scenario is averted." View note Allen and Rich say they first raised their concerns with the Office of Civil Rights and Civil Liberties on February 25, then again in a subsequent letter on March 13. The doctors' letter to Congress does not detail how DHS officials responded to the concerns they raised.Allen has conducted numerous investigations of immigrant detention facilities on behalf of the office over the past five years, according to the letter. Rich recently signed on to be a subject matter expert for the office, GolRead More – Source

As coronovirus spreads in Africa, number of cases exceeds 1,000

MacKinnon, Avalanche off to hot start, face Flames next