In Italy and beyond, churches grapple with coronavirus

ROME — After Italys coronavirus lockdown forced churches to suspend Mass, Don Andrea Vena, a priest in the Venetian beach resort of Bibione, had to find some other way to reach out to his flock.

So he loaded a Madonna into the cargo bed of a minivan, grabbed a loudspeaker and embarked on a tour of the town, blessing people from the back of the truck.

“People are scared and worried, if they cant come to church it is right that I go to them,” he said. “They came out on their terraces and through their windows and cried to see the Madonna.”

Across Europe, religious communities are grappling with the question of how to connect with their congregations without putting them — and their often elderly clergy — at risk of contracting coronavirus.

Some have started suspending services voluntarily, while others are being forced to do so by government measures. In Slovakia, as in Italy, religious celebrations have been banned. In Lithuania, churches have stopped using holy water. Belgiums Catholic churches and synagogues are suspending public services, and the Grand Mosque of Brussels has closed its doors. Turkey has suspended collective prayers in all of its 90,000 mosques. Pope Francis announced Sunday that Easter services will take place without a congregation.

“This discovery of the web as a place for prayer and that so many celebrations have been created on the web is both remarkable and beautiful” — Antonio Spadaro, adviser to Pope Francis

In Italy, Europes worst-hit nation, parishes are getting creative — and find value in social media to spread the good word. Pope Francis set the tone by live-streaming his Sunday Angelus prayer and early morning Mass from his home, the Santa Marta guesthouse in Rome.

At the Santa Maria ai Monti church in Rome, priest Don Francesco set up a WhatsApp group for parishioners. Inviting them to join, he wrote on Facebook: “The safe distance that we are rightly obliged to keep is canceled by prayer and spiritual communion and these instruments of communication can be a precious help.”

Other churches, such as San Francesco in Pisa, have been broadcasting Mass on their YouTube channel. Don Andrea thinks Facebook in particular has “revealed itself as an instrument of prayer.” Last Sunday, he celebrated a cloistered Mass on the beach of Bibione via Facebook Live, telling his virtual congregation: “I chose to bring you to the most beautiful cathedral.”

“This discovery of the web as a place for prayer and that so many celebrations have been created on the web is both remarkable and beautiful,” said Antonio Spadaro, a close adviser to Pope Francis and editor of the Jesuit periodical La Civiltà Cattolica. “Our spiritual communion has not been blocked by the impossibility of being together.” 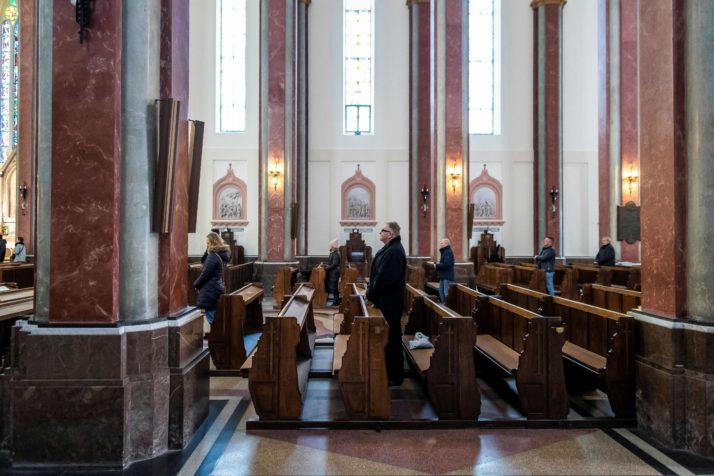 But he acknowledged that some Catholics have also taken to social media to complain about the lack of Mass. “That people have been left without sacraments is a wound. But most understand that it is better not to expose yourself than to risk your health.”

There is still some debate about whether churches should remain open for private prayer. Romes bishops ordered churches in the Italian capital closed but swiftly performed a U-turn when Pope Francis spoke out against such “drastic measures.” On Sunday, he demonstrated support for private worship, praying at the church of Saint Marcello, home to the wooden crucifix that was carried through the city in the 16th century — in defiance of rules for gatherings — as a plea for God to end the plague.

There is also confusion about whether priests should visit the sick. Some priests do not wish to put the ill or elderly at risk by becoming vectors of transmission. Italian retirement homes and clinics are closed to visitors, though most hospitals employ chaplains with nursing skills, who are allowed to spend time with patients and administer last rites.

Older priests are advised against visiting the sick because of the risk to themselves, said Father Michael Gaudoin-Parker, an English priest in Assisi, whose doctor has ordered him to stay at home. “Most priests in this area are of a certain age, over 60, because of the crisis in vocations.”

Perhaps the most painful limitation on religious services is Italys nationwide ban on events such as weddings, baptisms and funerals. In some communities, funerals have contributed significantly to the spread of the disease; in the southern city of Foggia, at least four people were infected at the funeral of a man who died of coronavirus, and 70 more were quarantined.

Religious burials are not completely prohibited. Families can ask a priest to say a short blessing at the cemetery, with only close family members present.

Nevertheless, Rome-based funeral director Francesco Renzetti said the pain of losing someone was accentuated by the ban on ceremonial funerals. “These are apocalyptic, surreal times. Its very sad and painful for people, they need that comfort from the family and they are not getting it. It is a terrible situation.”

Not all countries are following Italys lead, however. In Poland, despite the cancellation of big events and school closures, churches will continue to hold Sunday Mass. “Churches are like hospitals for the souls,” Deputy Prime Minister Jarosław Gowin told TVN24 television. The Polish Catholic Church has even requested to increase the number of Masses so the church pews would be less crowded.

On Friday, the Polish government banned any events — including religious services — with more than 50 people. That hasnt discouraged the Polish church, which said it would simply limit the number of believers in churches to keep services under the threshold. One archbishop even encouraged the faithful to use holy water: “Dont be afraid to reach out for sacred water. Dont be afraid of the church,” he said in a letter. Some churches have taken the decision to shut their doors, however.

Concerns about the impact of religious services have grown after it emerged that the husband of the first person to die of coronavirus in Poland was working as a priests aide and had given out Communion at a church. People who attended that Mass are now in quarantine.

Communion has also proven a divisive issue in Greece, where the Orthodox Church had stood firm on continuing its tradition of handing out bread soaked in wine, served to congregants from the same chalice, even as many other parts of the country closed down.

On Monday night, the Greek government stepped in and ordered the suspension of all services at all places of worship, for all religions. “Churches will remain open only for private prayer. Protection of public health requires clear decisions,” Prime Minister Kyriakos Mitsotakis tweeted.

Tiny structures in dragonfish teeth turn them into invisible daggers