‘Somebody was watching over us,’ says Kansas woman who survived tornado

"Come on, Ron," the 74-year-old recalled saying to her 78-year-old husband. They huddled under the basement stairs as a large rain-wrapped tornado hammered Linwood, west of Kansas City, for nearly an hour on Tuesday. "My husband looked up and he said, 'well, we don't have a roof anymore.' It just took about 30 seconds," Jones told CNN Wednesday, recalling the storm. The couple managed to make it out of their home uninjured about three or four minutes after the storm passed. Their quick thinking may have saved their lives. The floor above them was reduced to rubble. If they had waited any longer, they would have "probably been up there, maybe," Jones said, pointing to the sky. Pointing to the ground, she said, "or maybe down there, I don't know." The tornado that hit Linwood, Kansas, was rated an EF4 by the National Weather Service. It was on the ground for nearly 32 miles, lasted for 55 minutes and stretched about a mile wide, the weather service said. Peak winds are estimated to have been 170 mph.Jones and her husband had always planned to shelter under the stairs, where they thought they would be safe if a tornado hit. This was their first tornado after 31 years in the home. Jones said she doesn't remember the storm blowing out the windows. "It just happened so fast, I guess," she said. She said her daughter brought them to her house after the storm. 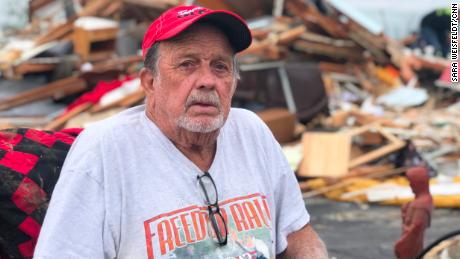 On Wednesday, the Joneses returned to their destroyed home in awe of the damage. The tornado destroyed her husband's new motorcycle. It flung their motor home in a ditch far from where it was parked. But they have managed to salvage some things. Their daughter found some photos. A stranger came by and dug Jones' purse out of the rubble, she said. They hope to find her husband's wallet, which was on the kitchen table."I seen the kitchen table over thRead More – Source

Why Domino’s Pizza sell-off was overcooked

Why Domino's Pizza sell-off was overcooked