With just over 60% of the result of Sunday's vote tallied, Zelensky, a television comedian and political newcomer who is widely seen as a protest candidate that appeals to younger voters, has 30.4% of the votes cast."I would like to say 'thank you' to all the Ukrainians who did not vote just for fun," he said in an appearance posted online by US-funded broadcaster Radio Free Europe/Radio Liberty (RFE/RL) Sunday.Zelensky will be hoping that life imitates art as he stars in "Servant of the People" — a Ukrainian television series now carried on Netflix — as a down-and-out schoolteacher who unexpectedly becomes President of Ukraine.If he does not pass a 50% threshold to win the vote outright, Zelensky faces a second-round runoff on April 21, possibly against incumbent President Petro Poroshenko, who came in second place with 16.4% of the vote. Former Prime Minister Yulia Tymoshenko won 13.1%, according to the preliminary results.Poroshenko addressed younger voters on Twitter Sunday."I would like to appeal to the young generation separately today," wrote Poroshenko. "You see changes in the country, but you want them to be faster, deeper and more qualitative. I understood the motives of your protest. I heard you." 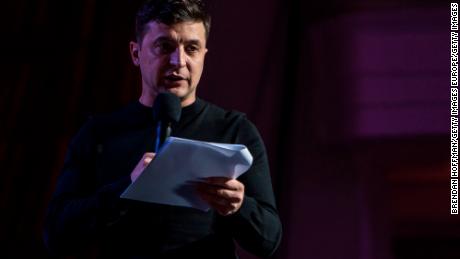 "It is up to you, Ukrainians, to decide which course the country will take, who will be the supreme commander, who will represent Ukraine in international meetings with Western leaders, and in conversations with Moscow," he added.Ukrainians went to the polls on Sunday after five years locked in a proxy war with Russia. In 2014, Russian troops annexed the Black Sea peninsula of Crimea, and Moscow fueled a separatist conflict in eastern Ukraine's Donbas region.The United Nations estimates that, as of February 15, the fighting has claimed almost 13,000 lives, with at least 3,321 civilian deaths and an estimated 9,500 combatants killed.Poroshenko campaigned on his ability to play tough with Russia. In a staRead More – Source

Golfer Sergio Garcia calls for Spain to ‘be more together’

Germany: Still no government, 4 months on