China surveillance of journalists to use ‘traffic-light’ system

The top US diplomat met with Kim in Pyongyang for two hours before Pompeo flew to South Korea Sunday afternoon for a two-day visit.In South Korea, Pompeo appeared alongside President Moon Jae-in, who said the world wanted to know the results of the Pyongyang meeting, "so if the secretary can disclose the results, please tell us." "I don't have much to add," Pompeo replied. "I will surely tell you in private about our conversation. I thought we had a good, productive conversation, and as President Trump has said, there are many steps along the way, and we took one of them today, another step forward."The secretary of state added that South Korea has been an integral part of negotiations aimed at denuclearizing North Korea, and he passed along Trump's gratitude for the country's efforts. On Sunday, State Department spokesperson Heather Nauert said in a statement that "Chairman Kim invited inspectors to visit the Punggye Ri nuclear test site to confirm that it has been irreversibly dismantled." Nauert said Pompeo "held productive discussions" Kim on Sunday.The statement said the two leaders "discussed the upcoming second summit between President Trump and Chairman Kim and refined options for the location and date of that next summit."Moon said he hoped that Pompeo's visit and a second US-North Korea summit would provide a chance to take "a decisive step forward in the denuclearization and peace process on the Korean Peninsula." In Tokyo on Saturday, Pompeo promised he would bring up Japan's concerns about North Korea's alleged abductions of Japanese citizens and its nuclear ambitions. A report in 2014 by the United Nations Human Rights Council concluded that hundreds of South Koreans, Japanese and other foreign nationals were kidnapped by North Korea after the end of the Korean War in 1953. 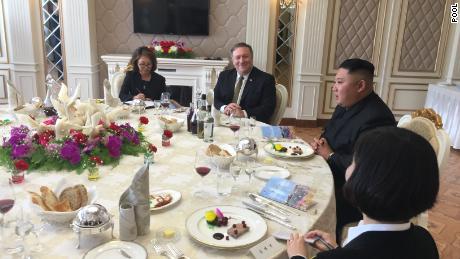 Pompeo said he wanted "a fully coordinated, unified view of how to proceed, which will be what is needed if we are going to be successful in denuclearizing North Korea."According to pool notes from Pompeo's early Sunday visit to Pyongyang — the secretary's fourth — Pompeo and Kim emerged from their meeting and had lunch together before Pompeo left for South Korea. "I am really pleased for this opportunity. After having a nice meeting we can enjoy a meal together," Kim told Pompeo as they walked down a hallway toward a guesthouse dining room. Later Kim said, "It's a very nice day that promises a good future" for both countries. Pompeo told reporters in Pyongyang the two "had a great, great visit" and that Trump sent his regards. Since Trump and Kim met in Singapore in June, US-North Korea relations have stalled. Trump canceled Pompeo's planned trip to Pyongyang in August, citing little evidence that North Korea had followed through on any of its commitments to denuclearize.Speaking to reporters en route to Japan, Pompeo said the plan was to "develop options for both location and timing" for a second summit, although he doubted they would "get it nailed" down mostly due to scheduling and logistics issues.