Beryl was the first hurricane of season

The Category 1 storm on Friday night was about 890 miles east-southeast of the Lesser Antilles, the arc of Caribbean islands that extends from the US Virgin Islands to Grenada. It was moving west at 14 mph, with sustained winds of 80 mph.Track the storm here. Caribbean governments have started issuing watches due to Beryl's path.Puerto Rico Gov. Ricardo Rossello declared a state of emergency for the island that is still recovering from the devastation of Hurricane Maria last year. Puerto Rico could see minimal tropical-storm winds, said CNN meteorologist Taylor Ward, but it is hard to predict Beryl's track beyond the 48-hour period. Rossello encouraged residents living in blue-tarped roof homes to find refuge in a shelter or family member's home. The government of Barbados issued a hurricane watch for Dominica and the French government issued a tropical storm watch for Martinique, Guadeloupe, St. Martin and St. Barthelemy, according to the National Hurricane Center. 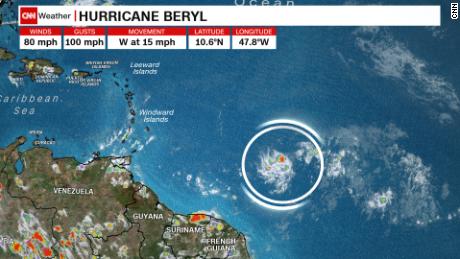 Earlier, the NHC described the storm as "Tiny Beryl" because of "its very small size." The center now says Beryl could "still be a hurricane when it reaches the Lesser Antilles late Sunday or Monday," but it's expected to weaken when it hits the eastern Caribbean Sea on Monday. The center says Beryl may not weaken until it reaches the area near Hispaniola and the central Caribbean Sea. Another storm, Tropical Depression 3, is forming about 230 miles off the coast of the Carolinas, Ward said. The storm is expected to become a tropical storm Saturday, the NHC said Friday night, with a "gradual strengthening expected through Monday." As of Friday night, no watches or warnings have been issued.The Atlantic hurricane season runs from June 1 to November 30, and peaks from mid-August to late-October.The year's first named storm, Alberto, hit in late May. It made landfall on the Florida Panhandle as a subtropical storm and ushered drenching rains across states in the South and Midwest. At least five people died in incidents related to that storm.

Schwarzenegger: ‘I’m back’ after heart surgery

Police don’t know if crashed Tesla was in Autopilot