NBA Playoffs, a Bonanza For Latino Players and Business

What: Players with Latin American ties are an increasing segment of the international growth of the NBA.
Why it matters: With tens of millions of fans in the region, these and other player connections to their nations of origin will make marketing there even more desirable for brands.

The NBA () has become more of a global game than ever before, and the numbers of players entering this past weekends start of action from around the world bear that out.

The most represented countries among the 62 international players on playoff rosters are France and Australia (seven players each), followed by Canada (four players), Spain (four players), Turkey, Croatia, Cameroon and Brazil (three players each). Thirty-six of the record 64 European players who were on opening-night rosters for the 2017-18 season are on playoff rosters.

The fact that Latino players are local aspirational heroes has also changed everything.

However what about a Latino influence? As the popularity of the NBA continues to take gold even more throughout Latin America, is that being reflected not just in talent but in activation?

In addition to the four players from Spain, another 10 Latinos dot NBA Playoff rosters, one of the largest and most impactful groups in recent history.

The playoff impact on rising Latinos should not be lost, as the NBA stakes claim to 50 million casual fans and 17 million avid fans in Mexico, Brazil, Argentina and Columbia alone, and their presence in Mexico, where a training center is opening and regular season games are now a yearly occurrence continues to amplify. 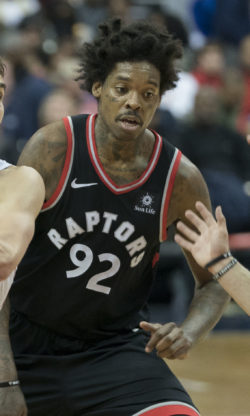 “Basketball is already the second-most watched sport in Mexico,” said Arnon de Mello, vice president and managing director of NBA Latin America recently. “Its growing tremendously. And there are more basketball courts in this country than any other sport.”

For other countries, the rise in interest, and in brands looking to activate against that interest either in consumer activation or in the media, has also been amplified.

“When we first started going to Mexico or the Caribbean, it was a bit of a learning curve, now the amount of content young people can receive, and the ways they consume the NBA mean there is no learning at all,” said Terry Lyons, a veteran sports marketer who helped create the NBAs global programs while at the league for over 25 years. “The star value of American players is obviously there, but the fact that Latino players are local aspirational heroes has also changed everything.”

Unlike a sport like baseball, which dominates some cultures in Latin America but not all, basketball, be it the rising 3 on 3 version that FIFA is pushing forward or traditional 5×5, has made a wider leap into the fabric of Latin America, and the ways to consume the game, especially around NBA Playoff time, have never been greater.

“The NBA has always looked to be global since David Stern arrived, and while most think that the focus is to Europe and Asia, the growth in Latin America for now may even be more impactful,” added Chris Lencheski, a veteran sports marketer now at MP & Silva and teaching at Columbia University. “Soccer will always be king, bit basketball has made some amazing strides both in broadcast and consumer engagement, and the more diverse its stars who speak Spanish, the better off they will be in the next decade.”

As the Playoffs get rolling the chances of a Latino player hoisting the Larry OBrien trophy come June will be more focused, but even if that does not happen this year, the sound of NBA basketball as a marketing property in Latin America is continuing to rise, and that sound is music to the ears of diverse brands, as well as the elite players who have embraced the culture of basketball, in countries far and wide.

Check out the stars of Portada's Sports Marketing Board, who will meet at Portada Miami on April 18-19 to discuss various topics related to the future of marketing and innovation in sports. Register now!

Joe Favorito has over 32 years of strategic communications/marketing, business development and public relations expertise in sports, entertainment, brand building, media training, television, athletic administration and business. The Brooklyn, New York native has managed the day-to- day activities in strategic communications for: Two of the worlds hallmark sports and entertainment brands (the New York Knickerbockers and Philadelphia 76ers), the worlds largest professional sport for women (the WTA Tour), the worlds largest sports National Governing Body (the United States Tennis Association) and the worlds largest annual sporting event (the US Open). He also oversaw the strategic planning, investor relations, communications and digital business development of the International Fight League during its two year run as a Mixed Martial Arts venture and a publicly traded company. Favorito serves on the boards of the Weinstein Carnegie Group, New York Sports Venture Capital, the National Sports Marketing Network, the Drexel University Sports Business program, and Columbia Universitys Sports Management program (where he is an instructor in Strategic Communications and Director of Industry Relations). Joe also maintains a well trafficked blog on the sports marketing and publicity field, “Sports Marketing and PR Roundup,” on the website joefavorito.com, as well authoring the first- ever text on the sports publicity industry (“Sports Publicity” published in August 2007 by Reed Elsevier and updated in 2012 by Taylor Publishing with a third printing coming in 2018), which is used in over 60 sports management programs in the U.S. He has been a guest speaker on sports marketing, social media and communications at a host of institutions, including Princeton University, the Wharton School at the University of Pennsylvania, Georgetown University, the University of Florida Law School, New York University, the Stanford University Graduate School of Business and many others. He is also a frequent spokesperson on the industry for publications ranging from Ad Age and The New York Times to NPR and CBS News. A graduate of Fordham University, Joe, his wife and two children reside in River Vale, New Jersey.