When a 17-year-old gunman walked into Maryland's Great Mills High School on Tuesday, the swift action of the school's sole resource officer, Blaine Gaskill, was instrumental in bringing the incident to a quick end. Gaskill's response was hailed as an example of exactly what a resource officer is supposed to do in such a circumstance, particularly when contrasted to the actions of the security officer in last month's shooting in Parkland, Florida. (In the incident at Marjory Stoneman Douglas High School on February 14, the armed school resource deputy waited outside the school building as the shooter gunned down students inside.)"He responded exactly how we train our personnel to respond," St. Mary's County Sheriff Tim Cameron told reporters.

As soon as the gunfire began, Gaskill rushed to the scene. He fired a round at the shooter, who also fired a round at the same time, Cameron said. It's not yet clear whether the shooter, Austin Wyatt Rollins, was felled by the officer's bullet or killed himself. "DFC [Deputy First Class] Gaskill fired at the shooter … almost simultaneously as the shooter fired," Cameron said. "This is something we train, practice and in reality, hope would never come to fruition. This is our worst nightmare."Gov. Larry Hogan called Gaskill "a very capable school resource officer who also happened to be a SWAT team member.""This is a tough guy who apparently closed in very quickly and took the right kind of action," he said. "And while I think it's still tragic, he may have saved other people's lives."

The incident began in a school hallway at 7:55 a.m., just before classes started. Authorities say Austin, armed with a handgun, shot a female student, with whom he had a prior relationship, and another male student. Gaskill responded to the scene in less than a minute, the sheriff said. Cameron said the entire incident took less than a minute, possibly seconds.The 16-year-old female student is in critical condition with life-threatening injuries, and the 14-year-old male student who was shot is in stable condition.Gaskill was unharmed. "He's doing well and we're going to do everything to support and promote him and his well-being," Cameron said.

Playing to a narrative

Gaskill's actions were praised, rightly, across social media. But some — most notably, the NRA — held him up as an example of the "good guy with a gun" theory. The theory goes, that bad guys will always find a way to circumvent whatever gun laws are in place. And "to stop a bad guy with a gun," as NRA head Wayne Lapierre said, "it takes a good guy with a gun." "This [Great Mills High School] armed school resource officer, you're not hearing anyone in #MSM talk about it because it disrupts their narrative," NRA spokeswoman Dana Loesch said in one of several tweets Tuesday. (MSM is short for mainstream media.)So far, this year, there have already been 17 school shootings where someone was hurt or killed. 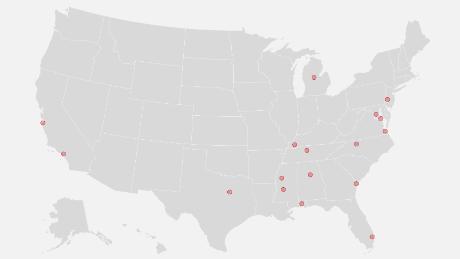 In the Parkland shooting, school resource deputy Scot Peterson never entered the building after taking a position outside. He resigned after he was suspended without pay for his inaction. "Had our resource officer taken action immediately, the result of the Stoneman Douglas Valentine's Day Massacre would have been different," Parkland student Kai Koerber told CNN. "We might not have had to walk over the bodies of our classmates, once lovely and wonderful people, as we were led away from murderous tragedy."Speaking to reporters, Dr. James Scott Smith, the superintendent of St. Mary's County's public schools, put the senselessness of it all in perspective."It looks as though the SRO [school resource officer] did exactly what the SRO is trained to do, and yet we still have a tragic loss of life," he said. "We still have somebody in critical condition. And we have students at the school and staff at the school impacted."