Fueled by high winds, the massive fire north of Ventura has burned 259,000 acres, Cal Fire said Saturday morning. That's up from 256,000 acres on Friday. Twelve thousand additional people were being evacuated Saturday from areas near the blaze, said Santa Barbara Sheriff's Office spokesman Brian Olmstead. The blaze broke out 12 days ago and has killed a firefighter and a woman trying to flee. The next 24 hours will be crucial as wind gusts of up to 55 mph and low humidity are forecast through Sunday. Strong winds and dry conditions are expected to fuel the blaze and could spark new fires, CNN meteorologist Ivan Cabrera said. The Thomas Fire is slowly devouring its way up the list of the state's largest wildfires. It's now only about 13,000 acres behind the all-time leader, the Cedar Fire, which burned 273,246 acres in San Diego County in 2003, according to Cal Fire. Despite the strong winds, firefighters have contained 40% of the blaze, up from 35% on Friday. Winds should ease late Sunday night into Monday, allowing for additional containment, forecasters said.

Firefighters are mourning the death of one of their own. Cory David Iverson, 32, lost his life battling the Thomas Fire on Thursday.Iverson was a fire apparatus engineer from San Diego and had been a firefighter with the California Department of Forestry and Fire Protection — also known as Cal Fire — since 2009. 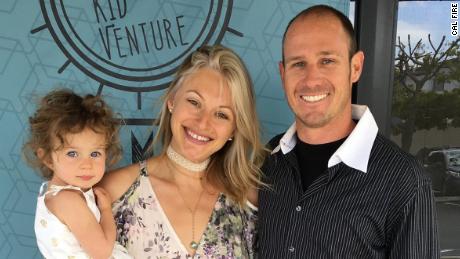 He drove a fire engine and was killed on the east flank of the Thomas Fire, Cal Fire spokeswoman Lynne Tolmachoff said.Iverson was with other crew members when he was killed, she said. He leaves behind his 2-year-old daughter and a pregnant wife who's due this spring. His death is the first firefighter fatality in the most recent string of wildfires in California. A woman was also killed in a car crash while evacuating last week, and Cal Fire says it considers her death to be fire-related.