Three of the charges applied to victims under 13, and three applied to victims 13 to 15 years old. Other charges were dismissed or reduced as part of a plea agreement. All 125 victims who reported assaults to Michigan State Police will be allowed to give victim impact statements at Nassar's sentencing in January, according to the plea deal.Nassar made a short statement apologizing and saying he was hopeful the community could move forward."For all those involved, I'm so horribly sorry that this was like a match that turned into a forest fire out of control," he said. "I have no animosity toward anyone. I just want healing. … We need to move forward in a sense of growth and healing and I pray (for) that."Judge Rosemarie Aquilina said Nassar violated the trust of his patients, and she praised the victims for coming forward."You used that position of trust that you had in the most vile way to abuse children," she said."I agree that now is a time of healing, but it may take them a lifetime of healing while you spend your lifetime behind bars thinking about what you did in taking away their childhood."Aquilina continued, "You violated the oath that you took, which is to do no harm, and you harmed them selfishly. … They are superheroes for all of America because this is an epidemic."Dozens of women, including several gold-medal winning members of the famed "Fierce Five" team of American gymnasts, have accused Nassar of sexual misconduct in his role as the USA Gymnastics doctor.Nassar was the team physician for the Michigan State University gymnastics and women's crew teams as well as an associate professor at MSU's College of Osteopathic Medicine. He worked at MSU from 1997 to 2016 and served as the USA Gymnastics physician through four Olympic Games.In all, Nassar had been charged with 22 counts of first-degree criminal sexual conduct and 11 counts of third-degree criminal sexual conduct at the state level, Megan Hawthorne, deputy press secretary for state Attorney General Bill Schuette, told CNN in July. Several of the first-degree charges pertained to victims under 13, and all of the state-level charges involve former family friends, gymnasts and patients of Nassar, Hawthorne said.Separately, Nassar is also awaiting sentencing on federal charges of receiving child pornography, possessing child pornography and a charge that he hid and destroyed evidence in the case. That hearing is scheduled for Monday.

US gymnasts speak out 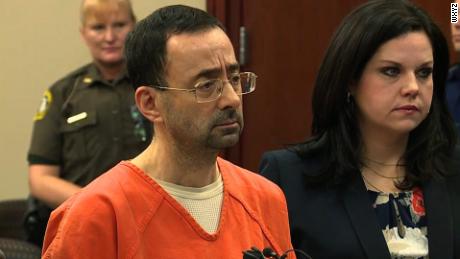 Reacting to Wednesday's hearing, three-time gold medal gymnast Aly Raisman called Nassar a monster on Twitter and criticized the court for referring to him as a doctor."Court referring to Larry as DOCTOR Nassar. I AM DISGUSTED. I am very disappointed. He does NOT deserve that. Larry is (disgusting). Larry is a MONSTER not a doctor," she wrote.Raisman and McKayla Maroney, another prominent gymnast, recently spoke out about abuse at the hands of Nassar. Maroney said Nassar molested her starting when she was 13 under the guise of providing "medically necessary treatment." Raisman, now 23, said she was first treated by Nassar when she was 15.Earlier in November, Raisman told "60 Minutes" she was angry at Nassar and the broader culture of USA Gymnastics that she said kept victims quiet for years."Why are we looking at why didn't the girls speak up?" Raisman said in a short clip released by "60 Minutes." "Why not look at what about the culture? What did USA Gymnastics do, and Larry Nassar do, to manipulate these girls so much that they are so afraid to speak up?"In a statement, USA Gymnastics said it was "very sorry" that Nassar had harmed any athlete."We note that affected women contacted by Michigan prosecutors supported resolution by plea, and USA Gymnastics also views Nassar's guilty plea as an important acknowledgment of his appalling and devious conduct that permits punishment without further victimization of survivors," it said.Rachael Denhollander, a former gymnast with USA Gymnastics, said in court in May that Nassar sexually abused her on five doctor's visits in 2000.Denhollander, a mid-level gymnast, said she went to Nassar because of his esteemed stature with USA Gymnastics. The abuse began at her first visit, when he put two fingers in her vagina. She thought at the time it was a legitimate medical treatment.At a follow-up treatment, Nassar unhooked her bra, rolled her onto her side on the massage table and put his hand on her left breast, she said."I froze, because I knew that was sexual assault," she said.

In a press conference after the guilty plea, several victims and attorneys representing more than 100 of Nassar's victims focused their criticisms on three institutions: USA Gymnastics, the US Olympic Committee and Michigan State University.Manley said those three groups had "miserably failed" to protect children under their care. "Make no mistake: This is an American tragedy," said attorney John Manley.He particularly slammed Michigan State University and its administration, which was told repeatedly about Nassar's abuse and protected him, Manley said. He likened their approach to that of the Catholic Church during the abuse scandals, and he called for them to release an internal report investigating the allegations against Nassar."These girls deserve justice, and they deserve to know who knew what (and) when," Manley said. 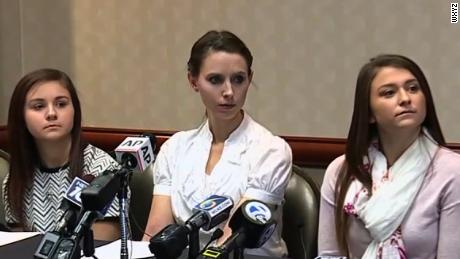 Denhollander, who filed the first police complaint against Nassar, said she was "grateful to the army of women that stopped a pedophile." But she said she had yet to hear the truth from officials who ignored victims and brushed off the women's complaints of abuse."We were silenced, we were mocked, and our abuser was told time and time again, 'I'm on your side,'" she said. "The culture that allowed this predator to keep abusing has yet to end."In a statement, Michigan State University spokesman Jason Cody said the school was grateful to police and the Michigan attorney general's office in investigating and prosecuting the case."The plea deal and conviction of Larry Nassar on November 22 on state criminal sexual conduct charges in Ingham County represents another important step toward justice for the victims," Cody said. 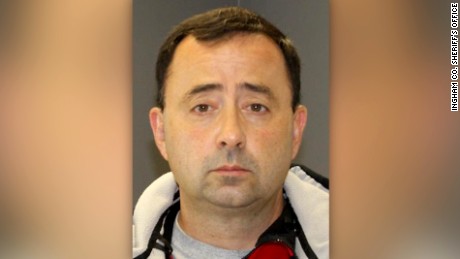 US Olympic gymnast Gabby Douglas released a statement Tuesday apologizing for a comment she made that some perceived as victim-shaming, and she shared her own experience with Nassar."I didn't view my comments as victim shaming because I know no matter what you wear, it NEVER gives anyone the right to harass or abuse you. It would be like saying that because of the leotards we wore, it was our fault that we were abused by Larry Nassar," the statement said.She also implied she had been abused as well.

"I didn't publicly share my experiences as well as many other things because for years we were conditioned to stay silent and honestly some things were extremely painful. I wholeheartedly support my teammates for coming forward with what happened to them," she added. In a statement, USA Gymnastics praised Douglas and her teammates for their willingness to speak out."The conduct of which Larry Nassar is accused is appalling, and we are very sorry that any athlete has been harmed during her or his gymnastics career," the organization said.In light of the sex abuse scandal, USA Gymnastics adopted a series of reforms in June that it said will help prevent and respond to future cases of abuse. All members are now required to report suspected sexual misconduct, and adults kicked out of a club will be tracked in a database."We are committed to further developing a culture that has safe sport as a top priority throughout the organization," USA Gymnastics said.

Why F1’s about to get a whole lot louder