Masks made Czech Republic the envy of Europe. Now they’ve blown it

There are currently more new Covid-19 cases per million people recorded in the Czech Republic than in any other major country in the world. On Friday, more than 11,100 new cases were reported in a single day, a new record. In the first 17 days of October, more people have died of the virus in the Czech Republic than during the previous eight months of the epidemic combined. The Czech Medical Chamber and the health minister have called on Czech doctors living abroad to return home to help fight the virus. Medical students and people with medical training have also been encouraged to come forward. More than 1,000 qualified nurses who've left the profession have offered to come back to help.For now, the Na Bulovce hospital has enough beds for everyone. But it's preparing for the worst. "We have other back-up beds prepared in other departments in case the capacity exceeds our current possibilities," said Dr. Hana Rohacova, the head doctor at the hospital's infection disease clinic. This weekend, the government began setting up a temporary field hospital in Prague. Czech Health Minister Dr. Roman Prymula told CNN he expects the extra beds will be needed as soon as the end of this month. It's a stunning development. Less than two months ago, the Czech Prime Minister Andrej Babis boasted his country was among the "best in Covid." 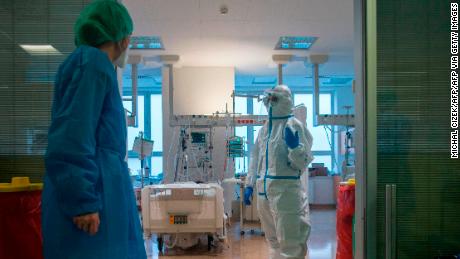 While the Czech Republic is technically experiencing the second wave of the epidemic, the first one this spring looks like an insignificant blip on the radar in comparison to the current state. The Czech Republic was once one of the most successful countries in Europe at controlling the spread of the virus. Babis' populist centrist government moved quickly to close the borders and implement a nationwide lockdown. Many other countries did the same, but what set the Czechs apart was the requirement to wear face masks by everyone, everywhere outside of the home.Czech data scientist Petr Ludwig was among those pushing for that mask mandate back in mid-March, months before western health authorities or even the World Health Organization was recommending them.Ludwig had just flown from New York to Prague, and says he was the only person on his flight with a face covering. When he arrived home, he dug through the scientific evidence supporting face coverings and made a YouTube video explaining why he was convinced masks were the answer. The Czech-language video attracted more than 600,000 views, in a country of only 10 million.An English version of the video has been viewed more than 5.7 million times.Days later, Babis announced the mask mandate. "We didn't convince the government, we convinced public by [social media] influencers and then government followed because our government is slightly populist. So they followed the opinion of the public," Ludwig told CNN. 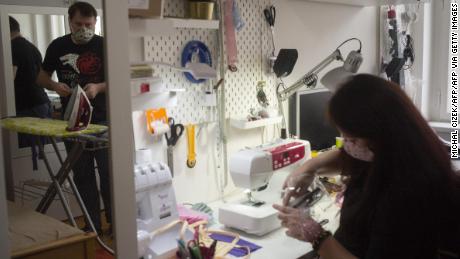 Medical masks were in short supply at the time, which was one of the reasons why the WHO didn't recommend their use. Faced with the shortage, thousands of Czechs dusted off their sewing machines and became part of a wartime-like effort to make and distribute masks where they were needed. One group of volunteers created an interactive map of need which resulted in more than 600,000 masks, made mostly by individual volunteers, to be handed out around the country. The Prime Minister was converted — he even tweeted some advice to US President Donald Trump on March 29, "Try tackling virus the Czech way. Wearing a simple cloth mask, decreases the spread of the virus by 80% … God bless America!"Most Czechs obeyed the mask rule. The measure wasn't particularly popular with the masses, but it was wildly effective in controlling the spread of the virus. And it made the country an outlier. "Some people from the WHO, for example, told us that this is nonsense. Many other countries around Czech Republic told us that wearing masks is nonsense. But the Czech people were doing well," said microbiologist Dr. Omar Sery, who was also one of the early advocates for face masks.The Czech Republic's first wave of infection peaked in late March at 408 cases in one day. The highest single-day death toll was just 18, in April. On June 30, the Czech Republic recorded no new Covid-19 deaths. That same day, an outdoor street party in Prague celebrated the end of the pandemic. Masks were not part of the dress code. Theaters reopened, indoor dining returned, people were allowed to travel abroad. Even Babis, the Prime Minister, went to Greece for a vacation.In almost every way, the country had regained the normalcy that people in across Europe were craving. It wouldn't last long."We didn't see dead people, we didn't see people with coronavirus in hospitals — the Czech people thought that this is nonsense and we don't need to wear masks," said Dr. Sery.

Virtual reality a rising force in the global healthcare industry