He was 12 years old and hundreds of miles away at his grandparents' house in Florida when his father broke the news over the phone. When young Moore returned home, his mother was inconsolable. "I felt like I was unlovable. I really felt small," the 44-year-old said. "I wanted to do all I could to make the house better, to feel better at home. And I didn't know how to do it."Moore discovered the power of opioids to take that pain away while attending college at the University of Kentucky in Lexington. After a series of minor surgeries for ingrown toenails, Moore ended up with more than 400 pain pills in his medicine cabinet. "My friend came over and showed me that I could use these pills then to feel better, to study longer, to just have increased performance and it was great in the beginning."It helped him feel more comfortable in social situations too — but on the outside, Moore says, he looked ridiculous — slumped over and drooling. Moore's addiction lasted more than 15 years — before he finally found the help he needed. It was a nightmare odyssey that led him to steal his grandmother's cancer pain medication and his police officer brother's ATM card to pay pills.He says he tried to kill himself twice and spent nine months in jail where he was beaten in a prison riot.Moore went through five different drug treatment facilities but always ended up using again. Not until Moore says he found a 12-step program and a mentor who showed him the art of building stringed instruments — did he find the self-love and confidence that turned his life around for good.

Moore was trying to get clean yet again in 2012 when he heard a master luthier — an expert stringed-instrument maker — was coming to his hometown of Hindman, a tiny hamlet nestled in the lush mountains of Eastern Kentucky.The town has a quaint main street, but it has been ravaged by unemployment with the downturn of the coal industry and a brutal epidemic of opioid addiction. Moore had been doing carpentry, building cabinets and had a love for guitars. 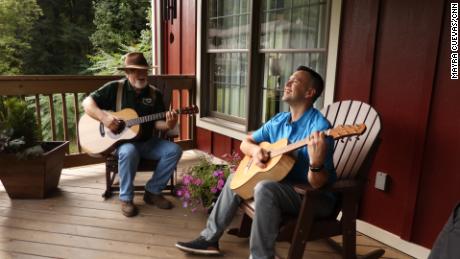 The desperate young man made a point of showing up to see a band one night where the luthier, Doug Naselroad, was performing. "He said, 'I need to come to work in your studio — I need you to teach me how to make guitars'," recalled Naselroad. "I said, 'Well, that's no problem. That's what we do.' And he said, 'No, you don't understand I need to come and do this.'" Moore admitted he had a felony on his record and thought that might be an obstacle to apprenticing under Naselroad. At the time he was going through a 12-step program to fight his addictions. "There was some discussion about the wisdom of bringing people in addiction into our studios," said Naselroad. In the end, Naselroad and his employer — the non-profit Appalachian Artisan Center, said yes. Moore was elated. "I was probably headed for death that time. How many more chances do you get in life?"

Finding peace in a wood shop

Moore found himself in Naselroad's wood shop nearly every day learning how to craft guitars from Appalachian native hardwoods in a town where the mountain dulcimer was first made in the late 1800s. "Music has always been a part of this community ever since pioneer days," said Naselroad. What started out as a one-year apprenticeship became a six-year journey that brought Moore back to life. 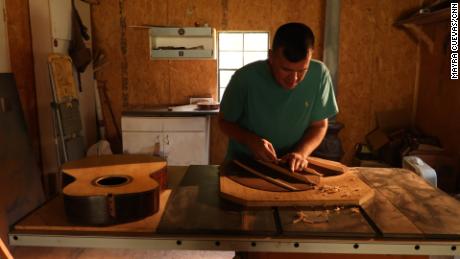 "(Naselroad) would bring in what people would throw away and he could see through the rough grain and see that there was beautiful wood laying underneath," said Moore. "To be able to do that and see beauty through dark places, is a gift he has and was able to show it to me." Moore says he began to see the beauty in himself peering through those dark places and his confidence grew as he built a new skill."You don't realize what you're capable of until you're able to produce something in an artistic form. Art releases something deep inside you don't know you have."Since he began, Moore has made more than 70 instruments. He's sold many of them and kept others. And while building instruments at night, during the day he earned a master's degree in network security administration. Eight years later, Moore is still sober and works as the director of information technology at a residential treatment center where a large percentage of the employees are recovering addicts themselves.

Moore's success inspired the creation of the "Culture of Recovery" arts program at The Appalachian Artisan Center. The non-profit already had pottery, luthiery and blacksmithing studios, and in 2018, with a grant from ArtPlace America, started inviting people in recovery into their studios to work with mentors. "We don't do the difficult work that the recovery centers do. We don't take people in who need to go through detox," Naselroad said. "What we do is we accept people into our studios when they've phased into a place where that's useful to them; when they're ready to come out into the light of day. We try to occupy them and mitigate their recidivism." 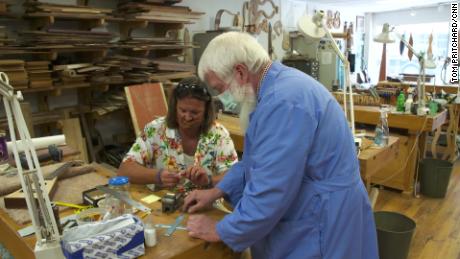 The program is voluntary and invites people who are enrolled in local drug rehabilitation programs like the Hickory Hill Recovery Center and Drug Court, which uses a noRead More – Source

Why Brus risk hunger over home

Passion for basketball fuels Bucks’ Connaughton on and off the court

The glitch that stole Christmas: How to handle smart tech gifts