From New York City to Washington, DC, to Pennsylvania — where nearly 3,000 people perished when hijackers took control of four commercial airplanes and crashed them into the World Trade Center, the Pentagon, and a field in Shanksville — relatives of the dead and politicians wore masks and tried to stand six feet apart as they paid their respects.Solemn events marking the day that never ends were altered this year by the seemingly endless coronavirus pandemic that has claimed more than 190,000 lives. At 8:46 a.m. ET in New York, the time the first plane struck the North Tower of the World Trade Center, a moment of silence was held at the site, with uniformed first responders and families honoring loved ones donning masks as an eerie siren blared in the distance. Unlike previous years, when the site of the attacks filled with people and victims' names were read by family members from a stage, the prerecorded names were played over speakers to avoid close contact. 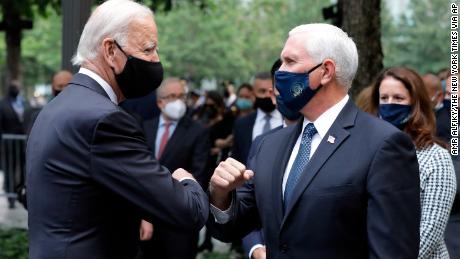 Vice President Mike Pence and Joe Biden, the Democratic candidate for president, exchanged elbow bumps before socially distancing as they stood with their wives at the National September 11 Memorial & Museum. Pence shared a prayer from Psalm 23:1-6. 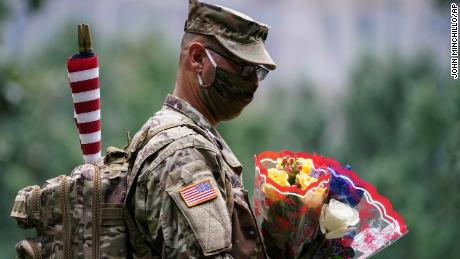 "In the memory of all those we lost on this day 19 years ago," he said in brief remarks. "In memory of the heroes that were forged that day. And heroes forged on battlefields ever since. And for the families, loved ones and friends they left behind. I pray these ancient words for comfort of your hearts and ours."Members of Congress also observed the anniversary at the Capitol in Washington. 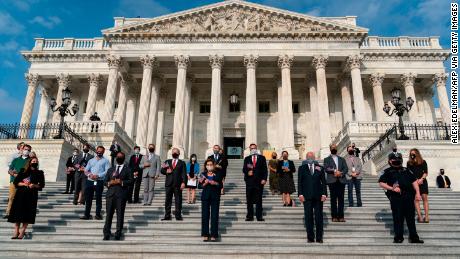 In Pennsylvania, the names of the 40 passengers and crew that died in the United Flight crash were read out at the Flight 93 National Memorial in Shanksville. Two remembrance bells were rung after each name at an event attended by President Donald Trump and First Lady Melania Trump. 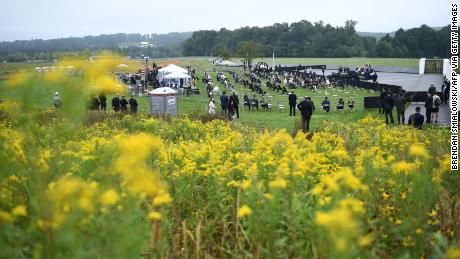 "To every 9/11 member all across this nation: The First Lady and I come to this hallowed ground deeply aware that we cannot fill the void in your heart or erase the terrible sorrow of this day," the President said. "The agony renewed, the nightmare relived, the wounds reopened, the last treasured words played over and over again in your minds. 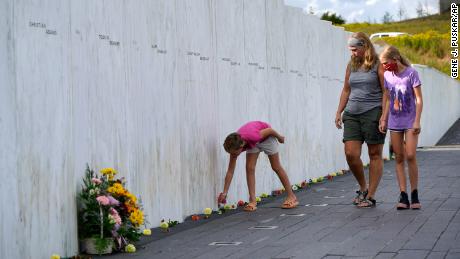 He added, "But while we cannot erase your pain, we can help to shoulder your burden. We promise that unwavering love that you so want and need, support, devotion and the very special devotion of all Americans." Trump spoke of the bravery of passengers who fought back against hijackers who intended to crash into the US Capitol. "In this Pennsylvania field, the 40 intrepid souls of Flight 93 died as true heroes," he said. "Their Read More – Source

Citi names Jane Fraser as CEO, the first woman to lead a major US bank

Five youths ‘abducted’ by PLA handed over to Army

Five youths ‘abducted’ by PLA handed over to Army

Arts competitions during Covid-19: Still dressed in sparkling gowns or suits, but performing from homes