A wild temperature rollercoaster will hit the Midwest this holiday weekend

Every state along and west of the Continental Divide will have temperatures above average Saturday through Monday. The eastern half of the country will begin to see a shift to slightly cooler, more seasonal temperatures this Labor Day weekend.

Record heat for the West

Nearly 45 million people were under excessive heat watches or warnings on Thursday, and that number is expected to rise to over 50 million this weekend as the extreme heat spreads east into other states.While the main heat wave really ramps up Friday for most areas of California, Sunday is expected to be the hottest day, with temperatures as high as 115 degrees expected away from beaches, according to the National Weather Service.More than 125 record highs will be possible Saturday through Monday, with even more records possible for warmest low temperatures in the same time frame."Death Valley is forecasting highs of 125°F for for consecutive days this Friday through Monday," says , CNN meteorologist Pedram Javaheri. "That would not only shatter daily records for all four days, making it the hottest September run of heat on record, but also set a new September all-time high." Javaheri said that out of the 3,240 September days on record since 1911, Death Valley has only recorded nine of those days at or above 120°F in September. Incredibly, the next five days are all forecast to exceed that number!The National Weather Service even warned that this weekend is expected to be worse than the region's recent August heat wave, which prompted rolling blackouts in the area.Another scary prospect is that all the extreme heat will lead to high fire danger over the weekend into Labor Day.

For Minnesota, Iowa, Nebraska and the Dakotas, Saturday will still feel like summer with temperatures well above average. By Monday, that all changes as those same states see a drop in high temperatures by 15-20 degrees. Take Fargo, North Dakoka, for example, going from a high temperature of 80°F on Saturday to 65°F on Monday. Rapid City, South Dakota, will go from 94°F Saturday to 73°F on Monday. Other cities such as Chicago, St. Louis, Oklahoma City and Dallas should also take note of that temperature change, as that colder air will continue to spread south and east next week. 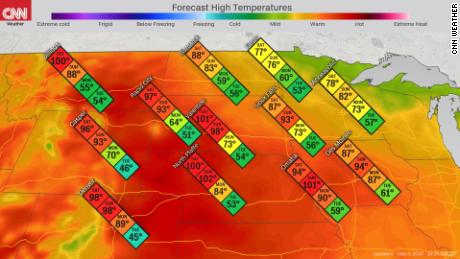 In addition to temperature changes, there is a stark difference in rain chances for the weekend. For Chicago, Milwaukee, Green Bay and Traverse City, Michigan, it will be full sunshine on Saturday, but a quick change to showers and thunderstorms for Sunday.

After a very warm week, this weekend will be quite refreshing for the Carolinas and Virginia. Several days this week have included heat advisories and/or excessive heat warnings for the region, as temperatures were in the mid-90s with heat index levels in the triple digits.For Saturday, Sunday and Monday, those temperatures cool into the low to mid-80s for Raleigh, North Carolina, and Norfolk and Richmond, Virginia. Wilmington, North Carolina, and Myrtle Beach, South Carolina, will see temperatures drop into the low to mid-80s, but residents will have to contend with some pop-up showers and thunderstorms. 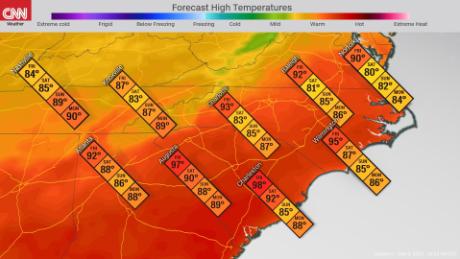