A drive-by wake. A masked funeral. This is how families are facing death in the pandemic

Ortiz-Sandoval's mother, a few of her nine siblings and her daughter, Lydia Cardenas, listened to the priest. In Spanish and English, he told stories of the 55-year-old's passion for life, and her courage in battling the aggressive liver cancer that ultimately took it.Heacknowledged the family's suffering and the difficult task of grieving and burying a loved one in the time of coronavirus — and said words you wouldn't expect to hear at a funeral, reminding family members repeatedly to stay home, wear masks, and even to save the masks they wore on this day as mementos of how their sacrifice helped save lives.After the Mass, a line of friends and family watched from across the parking lot of McKenzie Mortuary Services in Long Beach, California, as Ortiz-Sandoval's orchid-pink coffin was carried into a hearse. The procession, escorted by police, drove to the Forest Lawn cemetery in Cypress.There, again, most of Ortiz-Sandoval's family had to stay behind.The precautions were taken, of course, so this funeral wouldn'tunwittingly become a breeding ground in the pandemic that already had claimed more than 100,000 lives in the United States alone.In Illinois, three people haddied and 16 were infected after attending a funeral and another event, the US Centers for Disease Control and Prevention reported. In Georgia, about 20 cases had been traced back to a double memorial. And in Mississippi, a single funeral had sparked "many, many cases," with the state's health officer saying, "We don't want a funeral to lead to more funerals." But however necessary, funeral restrictions have forced loved ones to make trade-offs in their darkest hours, often forgoing comforting traditions and limiting circles of support. The added discipline, though, also has managed to open new avenues for grieving and for celebrating lives that ended in this historic time, whether because of the coronavirus or not.The social distancing measures weighed heavily on Cardenas, 22, who organized her late mother's funeral with help from her aunt and her mom's fiancé, Jeff Burson. As much as it hurt to not be able to give Ortiz-Sandoval the send-off she deserved, her daughter said, the measures were not too harsh. 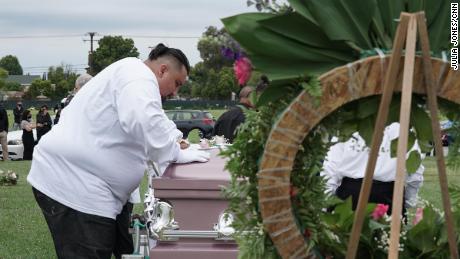 "I wouldn't want to expose my family, my loved ones to anything," she said. "But I also don't agree with it for the fact that so many public spaces are open, but a cemetery, which is open-air, is limited to 10 per funeral. It's just not ideal."Stay-at-home measures were also not ideal in the weeks preceding Ortiz-Sandoval's death. "We had planned on getting married, but the coronavirus kind of put a damper on that," Burson said, tearing up.Ortiz-Sandoval, originally from Mexicali, Mexico, and raised in Southern California, loved sinking her feet in beach sand. "We'd be driving on the freeway, and she'd just spontaneously, you know, want to go to the beach," Burson said."Lupe," as Burson called her, liked to dance, see family, and go to the beach — none of which she could do during lockdown, he said, frustrated he couldn't comfort his fiancée in her last days with her favorite things.So, on her last birthday on May 17, even though Ortiz-Sandoval could no longer speak or move, family brought sand from the beach to her bedside, running it through her hands as they played sounds of waves crashing on a speaker. "She went like this," Cardenas said, closing her eyes peacefully. "She smiled."

John Coronel thought he would be the only person allowed Friday at the burial of his father and sister at Rosehill Cemetery in New Jersey.As the dreaded day approached, funeral director Amy Cunningham called him to say the cemetery had changed its coronavirus restrictions, and would allow up to 10 people at the grave site. John was thankful. "It is kind of a relief because now the close family can be there together," Coronel told CNN. 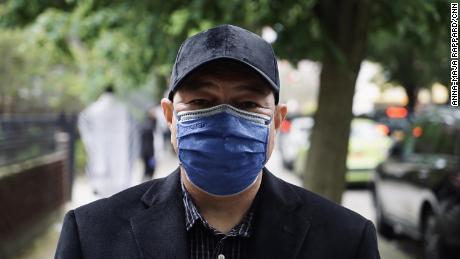 When the virus raged through New York City in mid-April, Carlos Coronel and his daughter Lordes Coronel both battled for their lives at a Brooklyn Hospital.Carlos passed away on April 22 at age 71. Lordes died a few weeks later, on May 18, the day of her 51st birthday. Both died from Covid-19.Seared into John Coronel's memory is the last time he saw his father. A day before the older man was put on a ventilator, his son cried at his bedside and explained to him that doctors would have to intubate him to fight the virus, he recalled."Normally, we would have had a viewing and approached the casket," Coronel told CNN before the funeral. "I feel like I don't get closure."Although CDC guidance has evolved over the course of the pandemic, many funeral homes do not offer viewings to minimize any potential spread of Covid-19.Instead, family and friends gathered on the street in front of the Coronel family's home in Brooklyn as a minivan drove by carrying both coffins, side by side. Carlos Coronel's favorite merengue song played from a small Bose speaker on the ground.Murmurs of prayer and agony pierced through the face masks. John Coronel sobbed as he shared the moment with extended family over a Zoom video conference.Neighbors paid their respects, peering from apartment windows overlooking the procession. 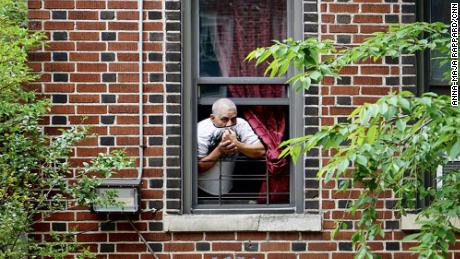 What Meghan’s dad made Harry promise