As soon as Konrad Iturbe started working from home, he ran into problems.

Sitting in his shared apartment in a northern suburb of Barcelona, the 20-year-old app developer saw his internet speeds fall off a cliff soon after the country entered a two-week shutdown on Saturday because of the coronavirus pandemic.

“It keeps dropping calls, its hard to upload and download files,” said Iturbe, who now relies on his unlimited mobile data plan to keep in touch with colleagues also working remotely. “Im doing what I can to keep off the internet as much as possible. I dont need to use Netflix because I already have a server full of movies.”

As more governments order people to work from home to limit the spread of the virus, questions are starting to be asked about how the internet — everything from peoples mobile networks to high-speed fiber networks — will be able to cope with more and more people logging in from their living rooms.

So far, the answer is: mostly OK, despite a more than 50 percent increase in global internet traffic, according to figures from Akamai, a firm that tracks web activity.

Carriers have doled out free data to customers to keep them online. Others have urged people to switch to fixed broadband networks and cut back on playing bandwidth-heavy video games. Europe, the United States and most developed countries have internet infrastructure that is built to withstand these surges of activity, according to industry executives and analysts, despite O2, the British carrier, suffering major disruptions that the company said was not related to coronavirus.

So far, most outages have been limited to digital services like videoconferencing apps that are drowning in new customers eager to check in with colleagues or customers.

“We havent seen an overburden of networks linked to increased teleworking,” Cédric O, Frances junior digital minister, said on Twitter. “They are, at this stage, correctly sized.”

These upbeat messages — and reassurances from telecoms carriers and tech companies alike — do not mean the world is out of the woods yet. 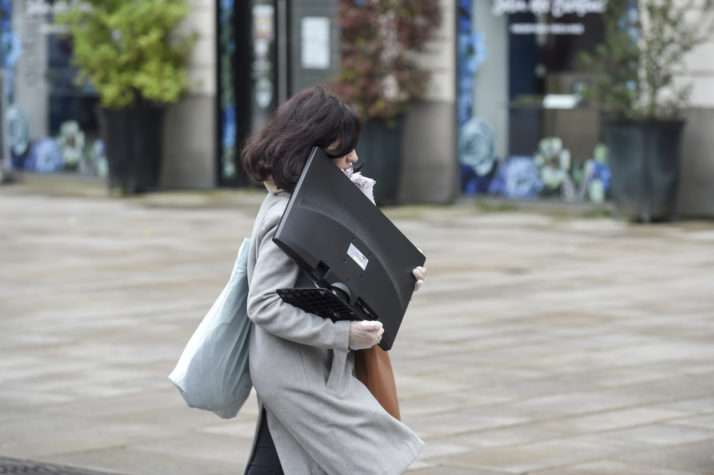 A woman carries a computer monitor for teleworking in Nantes, France on March 17, 2020 | Sebastien Salom-Gomis/AFP via Getty Images

With weeks if not months ahead when people will be working from home, telecoms infrastructure and mobile networks are likely to be tested. Digital services, including homeschooling apps now used to keep children up to speed during countrywide lockdowns, will be put under mounting strain. Regulators are expected to come under pressure to tweak existing net neutrality laws to prioritize certain internet traffic over others.

“We will need to watch what traffic patterns are like to ensure a smooth experience for everyone,” said Matthew Howett, founder of Assembly, a telecoms regulatory consultancy firm in London. “Some people are experiencing problems with online services. But thats a problem with those services, and not the network.”

With people logging in from home, often for the first time, carriers are trying to calm peoples nerves — though often they are handing out mixed messages about how to respond to the ongoing crisis.

In France, for instance, Orange, the former telecoms monopoly, gave away a months subscription to its paid-for television service for kids and extra data to its mobile customers. But in Spain, where the company has millions of users, it teamed up with Telefónica and other local operators to urge people to cut back on unnecessary internet traffic and to rely on traditional phones, not mobile phones, wherever possible.

“A rational and responsible use of the networks will allow us all, service providers, companies and individuals, to ensure that we will have quality communication in a sustainable way,” the companies said in a joint statement.

Others like Proximus in Belgium also gifted free data to their mobile customers, while Vodafone, whose operations span Europe, allowed users to access medical information for free on their devices.

In the U.S., where cities and entire states are rapidly shutting down bars, social events and some schools, Comcast, the broadband provider, opened its Wi-Fi networks to non-subscribers, while AT&T said it would not charge customers who could not pay their bills because of the pandemic. The U.S. Federal Communications Commission also got more than 100 local broadband and mobile providers to pledge to keep Americans connected to the internet until at least late May.

“Traffic patterns are indeed changing as a result of increased home working and distance learning” — Lise Fuhr, head of ETNO

Lise Fuhr, head of ETNO, a trade group of European carriers, said that she had no evidence of significant disruptions caused by the global crisis.

For companies that coordinate global internet traffic, so-called exchanges that sit at the center of the digital economy, many said that they were expecting demand to only increase as home working becomes the norm.

At the Amsterdam Internet Exchange in the Netherlands, traffic had gone up by as much as 12 percent after the Dutch imposed fresh restrictions short of a lockdown, according to Bram Semeijn, a company spokesman, who denied they would not be able to manage the demand.

“Even if traffic doubles due to the coronavirus impact, wed still be able to handle it easily,” he said.

In Frankfurt, home to another globaRead More – Source

Silicon Valley is going all out to fight coronavirus. Thats a risky move.