The new viral strain of the deadly coronavirus that originated in the central Chinese city of Wuhan has now infected several thousand people and killed more than one hundred. Heres POLITICOs guide to the state of its spread globally and how Europe has reacted to it.

What impact has the coronavirus had globally?

Since it was first detected in Wuhan in December, the previously unknown strain of the coronavirus — officially referred to as 2019-nCoV — has spread to more than a dozen countries, most of them in Asia, but also including the United States, Canada, France and Germany.

As of January 29, a total of more than 6,000 infections and 132 deaths had been reported worldwide. The vast majority of infections, and all of the 132 deaths, occurred in China.

How does the illness affect people and how is it spread?

The symptoms resemble a common cold, causing fever, fatigue, a cough and breathing difficulties. The virus can be transmitted in “respiratory droplets produced when an infected person coughs or sneezes,” according to the Centers for Disease Control and Prevention.

In one of its most recent situation reports on the virus outbreak, the World Health Organization (WHO) said the viruss incubation period in the body is believed to be between two and 10 days. “Detailed epidemiological information from more people infected is needed to determine the infectious period,” the report said, “in particular whether transmission can occur from asymptomatic individuals or during the incubation period.”

On January 29, British Airways told Reuters that it has suspended all direct flights to and from mainland China.

The WHO also said it is launching a clinical data platform to allow member countries to “contribute anonymized clinical data in order to inform the public health clinical response.”

How has Europe been impacted by the outbreak?

So far, there have been no fatalities associated with the new coronavirus in Europe. However, infected patients are currently being treated in France, Finland and Germany, the only EU member countries with confirmed infections. Many other European countries reported suspected cases, including the U.K., where 130 people had been tested for the coronavirus as of January 29 — all negative, according to the countrys Department of Health and Social Care.

The U.K. is now advising people traveling from Wuhan in the last 14 days to stay indoors and avoid contact with other people, and to call the National Health Service non-emergency number 111 to inform them about the trip.

On January 29, British Airways told Reuters that it has suspended all direct flights to and from mainland China. The suspension will remain in effect until at least January 31, pending further risk assessments, an email read. Lufthansa is suspending its own, Swiss and Austrian Airlines flights to and from China until Febuary 9, the German airline said Wednesday. 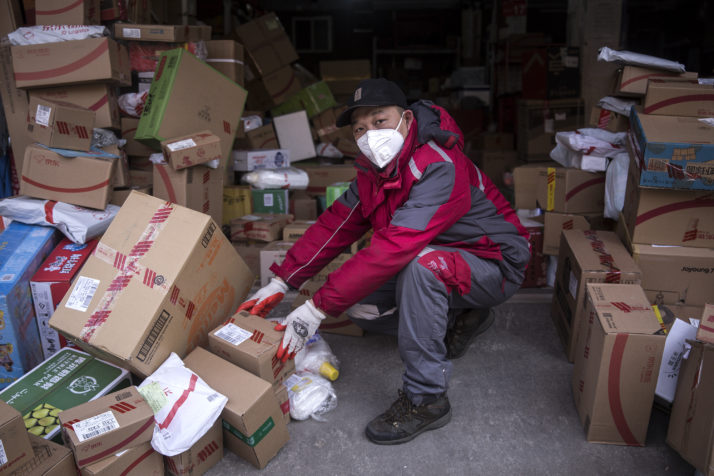 The virus was first detected in Wuhan in December | Getty Images

German Health Minister Jens Spahn on Tuesday tweeted that “it had been expected that the coronavirus would reach Germany. But the case in Bavaria shows that we are well prepared. The patient has been quarantined and is being cared for.” Spahn also said people who the infected man had contact with were being examined to prevent a further spread of the virus. It was reported on Tuesday that the German patient was infected at work by a colleague who had been to China.

Later on Tuesday, the Bavarian Health Ministry confirmed that three more cases of coronavirus had been identified in Germany. While the German Health Ministry continued to officially classify the situation as “low risk,” many people in the country appeared to be getting anxious as pharmacists reported they were running out of face masks due to a sudden spike in demand.

As an additional safety measure, flights en route to Germany can only land at five designated airports in the country, if there is a confirmed or suspected case of coronavirus reported on board.

France had confirmed five cases of coronavirus as of January 29. A special arrival zone for passengers traveling from China, Hong Kong and Macao was set up at Paris Charles de Gaulle airport on January 25, to prevent potentially infected individuals from further spreading the virus, according to the countrys health ministry.

Are European countries helping their nationals in China?

As the number of reported coronavirus cases in China started to increase, some countries began preparations to evacuate their diplomatic staff and private citizens from the country.

A Commission preliminary assessment of the information from EU countries showed “a strong level of preparedness, but there are still a number of gaps.”

Reuters reported that France is set to send an airplane to China on Wednesday to repatriate nationals “with no symptoms.” Junior transport minister Jean-Baptiste Djebarri said that “these people will be put under quarantine. And then there will be a second flight, at a yet undefined date, with people showing symptoms … who will be cared for in Paris.”

Similarly, Germany has announced the evacuation of 90 citizens from the Wuhan region while the Dutch government is looking to repatriate 20 people. Meanwhile the British government will fly 200 of its citizens from Wuhan on Thursday, the BBC reported.

Spain and Belgium are also among the countries that have said they would repatriate their citizens.

Is there any coordination at the EU level?

The EU will partially finance flights to bring home some 600 Europeans from areas of China affected by the deadly coronavirus, following a French request for assistance. The EU Emergency Response Centre is in touch with governments to coordinate the arrivals, a Commission official said Read More – Source

Thomas Fire is the largest fire in California history

Greek commissioner to speak out on bribery allegations