Torrential rain will deluge parts of the Southeast this week as swaths of the Northwest will get walloped by feet of snow. Heavy rain and flooding could slam the Southeast Monday and Tuesday, the National Weather Service said. Ferocious storms — including tornadoes — have killed at least 10 people since Friday: three in Texas, three in Louisiana, three in Alabama, and one in Oklahoma. 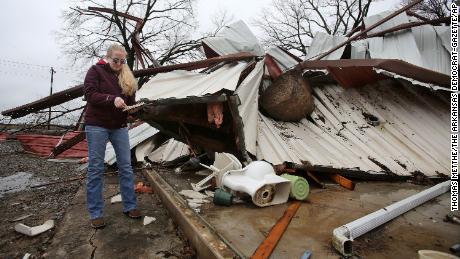 "Some of the same areas impacted by the severe weather over this past weekend will see scattered showers and thunderstorms, hampering clean-up," CNN meteorologist Gene Norman said Monday.The storms will be slow-moving, "leading to persistent rains through Wednesday," Norman said. The Southwest won't just be wet — it'll also be unusually warm. "Record warm daily high and low temperatures will be possible in parts of the Southeast through Wednesday," the National Weather Service said. "Temperature anomalies on average will range between 10-20 degrees above normal across much of the Mid-Atlantic/Southeast and into the Central Appalachians."But in Montana and the western Dakotas, the high temperatures Monday and Tuesday are expected to stay below zero degrees. Read More – Source

Erik Jones in search of breakthrough win at Bristol