Of the Scott County School District's 560 Hispanic or Latino students, 154 were absent from school Thursday, Superintendent Tony McGee said.Attendance improved a day later. Fifty Hispanic or Latino students missed school on Friday, McGee said.The reasons for each school absence weren't immediately clear. But school officials are visiting the homes of the absent Hispanic and Latino children to relay a message: They'll be safe at school, Assistant Superintendent Chad Harrison said"We're trying to make sure these kids know they got a safe place," Harrison told CNN's "New Day" on Friday. At least 680 undocumented immigrants were detained Wednesday in raids at seven food processing plants across central Mississippi, including two in Morton, a city in Scott County.After being scheduled for proceedings before federal immigration courts, many of the workers were released. More than 300 of them had been released by Thursday, US Immigration and Customs Enforcement spokesman Bryan Cox said. Those who had previously been ordered removed from the US were processed for removal, ICE said.The raids had several knock-on effects for affected families, including the workers' children, some of whom didn't immediately have adults to go home to Wednesday. Volunteers took some of them to a gym in the city of Forest, distributing donated food and drinks to them until the kids were united with family members.By Wednesday night, every affected child in the Scott County school district was with a parent or guardian, Harrison said.Hispanic and Latino children comprise about 29% of the student population in Morton, according to McGee.

Another school district was put on a 'soft lockdown'

In Forest, schools were on a "soft lockdown" as a safety precaution Friday because the district received suspicious phone calls after the raids, a school official said in a recorded voice messagesent to parents.The district received the calls Friday morning, and they were reported to authorities, Forest Municipal School District Superintendent Karen Norwood said in the message.Classes would be held as normal, but the district will "limit people coming and going from buildings," Norwood said.Norwood, in a phone call with CNN, declined to give details about the suspicious phone calls.

Educators and others say they're looking out for families

The raids affected attendance on Wednesday, as well. Most of the Scott County district's Hispanic or Latino students had checked out of school by afternoon's end, Harrison said. Many people flocked to a parking lot of one of the plants in Morton that day, waiting for news about the detainees. 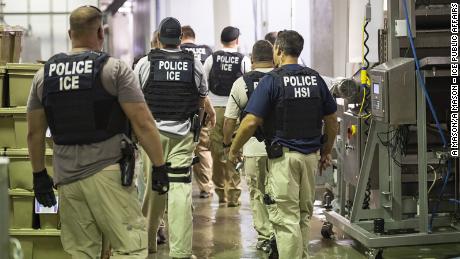 ‘Mildly venomous’ snake gets loose at the Bronx Zoo

We are impartial: Twitter India on caste bias allegations

#Stayhome guide for Friday: Do yoga and storytelling with kids, whip up tasty, hearty mee suah and more