Hamilton is searching for a record-breaking sixth win at Silverstone but a wobble on his last lap in the shootout for pole saw him fall agonizingly short of the Finn's time.Charles Leclerc impressed for Ferrari to claim third with his teammate Sebastian Vettel languishing back in sixth.READ: Leclerc dreams of winning world championship"It feels very good," Bottas said after qualifying. "It reminds me why you do it, for these kinds of feelings. It's been pretty close all weekend and today with Lewis, I'm just really, really happy to get a good lap and get pole."A disappointed groan went up from the partizan home crowd when the deficit of six milliseconds flashed up on the big screen. 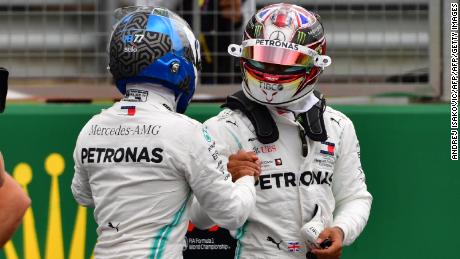 READ: Daniel Ricciardo — 'I could have had a world title by 30'READ: Can Lewis Hamilton overtake Michael Schumacher in Formula 1's record books?Fans flock to this Mecca of British motorsport in their droves every year and British flags adorned the stands at every turn."It's the best grand prix of the whole year and it's because of the energy the people bring," Hamilton said. "The tracks are great, the layouts and designs but without people like this to fill it and bring energy, its nothing. "We've got the best energy in England."Hamilton and the thousands of visiting supporters will be given hope ahead of SundRead More – Source