The leader of Team Avocado, a left-wing conspiracy group, has taken the Facebook page of her “ministry” offline, following an arrest in Newfoundland for tweeting about a fake bomb threat.

While reams of reporting have covered the cranks and extremists on the margins of the post-Trump right, nuttiness knows no party, and the saga of Team Avocado is a good reminder of that. The story begins with a self-styled evangelist who calls herself Hepzibah Nanna.

Hepzibah Nanna — Hepzi, for short — first came to public attention as AuroraInTheDesert, a YouTuber who posted videos of herself getting drunk on the spirit. She drifted into the Resistance around the time of Donald Trumps election to the presidency, and was one of the owners of the @OfficialNMP (not my president) account, which garnered more than 50,000 followers.

The testimonials on her ministrys website, The Lion Triumphs, contain accounts of her healing those afflicted with cancer and AIDS, as well as testimonials from Hillary Clinton and Barack Obama, in which the former president and Secretary of State supposedly extol her services as a spiritual advisor. Nanna posted on Facebook a request for $550 to cover the costs of the Newfoundland trip, to be received via The Lion Triumphs.

Nanna and her friend Sharyn Richardson were arrested in June in Newfoundland and released on bail, with the conditions that they not post to social media and check in with the Royal Newfoundland Constabulary periodically before their court date on August 2. A local reporter in Newfoundland interviewed her shortly after she posted bail, which can be heard below.

In it, Nanna says she was supposed to leave the province several days earlier, but the arrest put a wrench in those plans. She claims to be on a revival tour for The Lion Triumphs, her “online church.”

“I reach out to a lot of people in the occult which is the people who are trying to set me up are people who are high-level human traffickers, that are trying to set me up for this. I have nothing to hide,” Nanna tells the reporter. “Im just here just trying to preach the gospel of Jesus and share hope with the people and do work with the FBI. My friend is a special agent, Im not an actual agent but Im a civilian consultant, and thats how we got involved in everything that happened the other day.” (RELATED: Heres A List Of Hoax Hate Crimes In The Trump Era)

The reporter then asks about the backlash to her work online.

“Not just online,” Nanna replies. “I have people coming to my house. I have people who have been hunting me down for years. I am under FBI protection, Im actually currently very involved in the cases against Donald Trump and thats part of the reason why Im in this situation, because there are some very famous men who are very wealthy who tried to set my friend and I up.”

Nanna, at least, seems to have violated the conditions of her bail by posting a video to her Facebook shortly after her release. In the video, she claims that she was not actually arrested, and that she was tortured during her illegal detention. The same claim was put out on a Twitter account connected to the Team Avocado group.

The Royal Newfoundland Constabulary confirmed to the Daily Caller that it was them that arrested her, contrary to Hepzibahs claim that it was not. They also denied any torture occurred in the jail. Multiple requests for comment from Nanna have not been returned.

The “CW” signature at the end refers to Chris Wray, currently the FBI director, raising the question of whether they are impersonating FBI agents, which is a crime. This is not the only instance in which they have claimed to be connected to federal agents.

To delve deeper into the world of Team Avocado is to enter a real-life fanfiction of Hepzibahs creation, a cloak-and-dagger story in which, naturally, she served as a key figure. The conspiracy which they claim to be fighting is a ring of human traffickers and pedophiles. Like a mirror image of Q-Anon, Team Avocado believes that Trump is not working against the ring, but that he is deeply complicit in it, along with Blackwaters Erik Prince, Betsy DeVos, and others.

If you took all the major players of the investigations surrounding the 2016 election and pasted them, Mad Lib-style, into a James Bond novel, youd have something like the worldview of Team Avocado.

The group seems to have grown out of Hepzibahs “ministry,” The Lion Triumphs, as a way of reaching out to the vast anti-Trump social media network. The Lion Triumphs has a history of soliciting donations online for Nannas ministry trips. 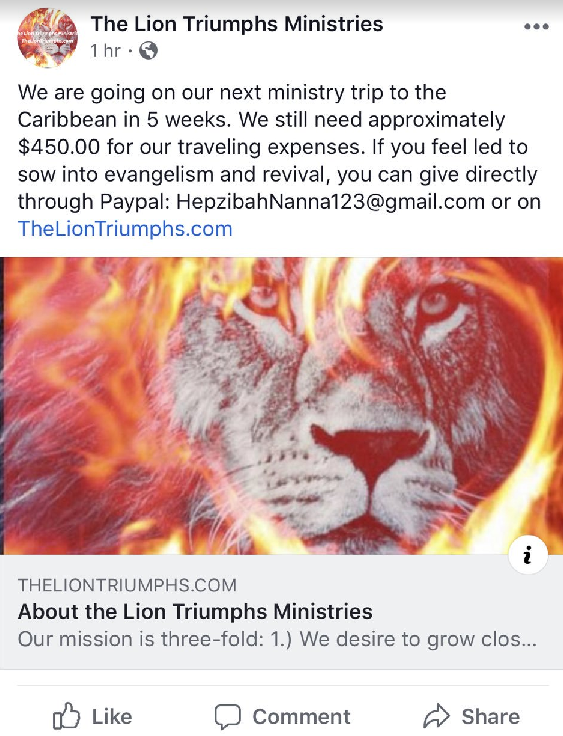 The manual of Team Avocado, for sale on Amazon, was co-authored by Hepzibah Nanna and former deputy attorney general Rod Rosenstein, according to its front cover.

Team Avocado is comprised of four groups that are called SJL Councils. SJL means Supernatural Justice League, and their origin and operations are described in detail in the manual. Each has what they describe as a “diplomatic head.” For the Beacons Council, its Hillary Clinton:

The Guardians Council has Rod Rosenstein as its “diplomatic head,” the Sentinels Council has Alex Younger, head of MI6, and the Pharos Council has Michelle Obama. Heavy hitters, to be sure.

These alleged connections to world leaders are how Hepzibah and her associates managed to rope in unsuspecting members of the anti-Trump resistance. By claiming to have sources and allies at all levels of government and in intelligence services, who sat on the councils, Team Avocado offered access to a covert conspiracy to take down Trump and his alleged human trafficking ring. (RELATED: The Medias Russia Bombshells Look Even Worse Now That Mueller Found No Collusion)

To sweeten the pot, various messages went out to group members impersonating public figures, including special counsel Robert Mueller, one of which was shared with The Daily Caller. 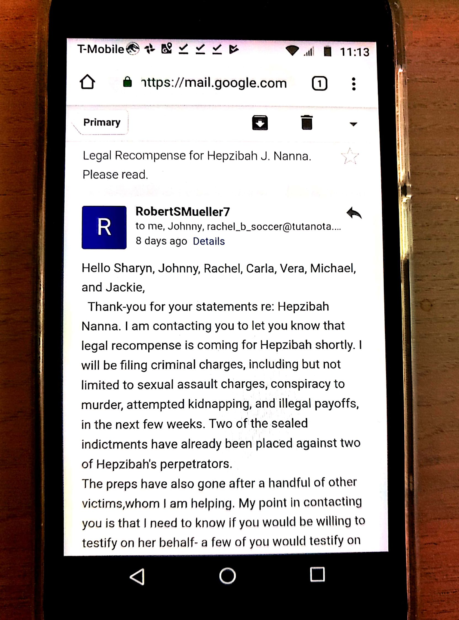 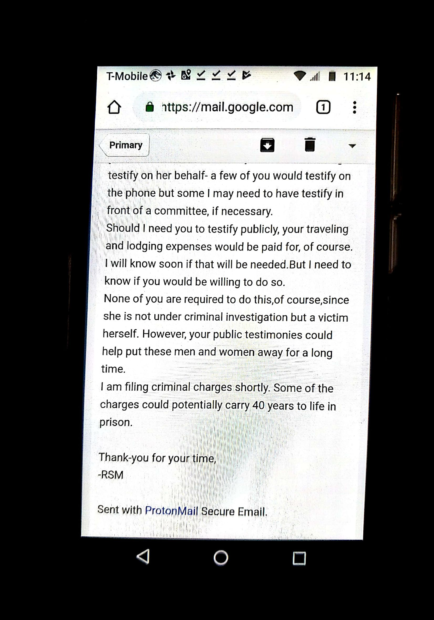 The 53-page manual claims that the councils were started by two brothers named Igor and Joab Valsyno, who worked for Mossad, before beginning to “utilize their skills in more vigilante-like ways. This started the Guardian Council – which was the first of the four SJL Councils.”

“The Guardian Council has several world leaders, politicians, famous hackers, celebrities, and other famous people serving on the Council,” the manual reads.

“TeamAvocado is the term we use for the entire family” of four councils, the manual reads.

The rest of the manual contains lists of names, chat room guidelines, and other rules for interacting both with other members of Team Avocado and the public at large. The Daily Caller contacted every Twitter handle listed as an active member and asked if they still are involved in the group. Most did not respond, but several said they had left the group.

In the section titled “Our Work,” it lists their purposes as “fighting human trafficking,” “counterterrorism,” “fighting Nazism and the rise of the Neo-Nazi regime,” and “helping to stop false flags.”

Also included is a list of key terms, which are useful for decoding the lore of Team Avocado. I.C. stands for intelligence communities, and according to the manual “SJL works closely with a number of them, especially the FBI, MI6 and the DOJ.”

Other key terms are “Astral projection,” “the act of leaving your body”; Blackwater, “a privatized secret elite black ops military division”; “Watchers”; something called The Collective, “the more inclusive term for the Illuminati … made up primarily of GOP members and other Conservatives'”; and #OpHydra, “the term for the Neonazis black hat hacking agenda”; “rogues”; “flippers,”; and “triggers.” According to Team Avocado, “BW [Blackwater] answers directly to John Bolton, the National Security Advisor. BW crafted and formulatedRead More – Source

Avenatti May Sue Tucker Carlson For Defending His Own Daughter