The North Korean Ministry of Foreign Affairs urged Spanish authorities to investigate the raid on February 22, in which it claims an armed group "bound, beat and tortured" staff before making off with computers.The ministry added that it was watching "rumors" that the FBI and another anti-North Korea group were responsible for the raid, but did not blame Washington explicitly, Reuters reported.North Korea called the "illegal intrusion" a "grave breach of state sovereignty" and called on Spanish authorities to bring those responsible to justice in "conformity with the relevant international law." 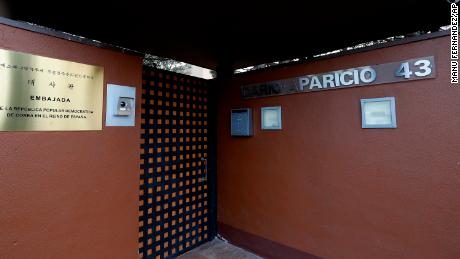 A secretive North Korean dissident group — called Cheollima Civil Defense (CCD) — claimed responsibility for the raid but disputed allegations of an "attack" involving armed intruders.The group also denied that any other foreign governments were involved in the operation or that it was related to US President Donald Trump and North Korean leader Kim Jong Un's summit in Hanoi, which occurred days later."This was not an attack. We responded to an urgent situation in the Madrid embassy. We were invited into the embassy, and contrary to reports, no one was gagged or beaten. Out of respect for the host nation of Spain, no weapons were used. All occupants in the embassy were treated with dignity and necessary caution. There were no other governments involved with or aware of our activity until after the event," a statement released by CCD said.

But just five days after the incident, the group's alleged leader, a US resident, contacted the FBI with material obtained from the raid, according to a document from Spain's High Court. The document said the alleged leader contacted the FBI "in order to provide information regarding the incident at the Embassy, ​​as well as the audiovisual material allegedRead More – Source