Carlson's rant, which sparked an ongoing boycott among advertisers, was typical xenophobia. Hayes, however, is an ally of immigrants and refugees who's covered the issue with compassion. And yet, his statement shows just how little Americans know about asylum seekers. "How did you get the courage to come here?" American friends would ask my mother after learning about our journey to the US. Mom always smiled and changed the subject. How do people get the courage to jump out of a burning building? Every refugee, save for those born in transit camps, once had a life. My family did too, in a city called Kharkov in Soviet Ukraine. My mother was a doctor; my father an engineer. We had cousins, friends, favorite restaurants. We lived in an apartment block with lilac trees in the yard. We lived under an anti-Semitic dictatorship, but it was still a life. In 1989, when I was 9 years old, communism began to collapse. Anti-Semitism surged to a point where it was no longer safe for me to go to school. There was unrest in the Baltics and the Caucasus. Finally, rumors of nationalists planning pogroms swept through Ukraine, and that was enough. Three days after setting out from Kharkov, we were being herded by humanitarian workers around a train station in Vienna. We had 10 suitcases, almost no money, no citizenship status, and no contacts in the West. A thousand anchors once tethered me to the world, and suddenly they were gone. Over the next six months, we stayed in various Austrian shelters alongside tens of thousands of other refugees from Yugoslavia and the USSR, while we waited for America to decide our fate. The feeling of standing in nondescript rooms in the US Embassy, watching my father plead for asylum with bored immigration clerks and being prodded by equally bored quarantine doctors is something I'll never forget. I don't think any refugee can. The American clerks, the doctors, and even the humanitarian workers trying to help us were in Austria because of their jobs. They were still anchored to the world; they could always go back. We had no such luxury. Even the idea of the asylum interview was stacked against us. We had to interview to continue to exist."Can a man who's warm understand one who's freezing?" the great Soviet writer Aleksandr Solzhenitsyn once wrote. We prayed they could. Every time I stumbled out of the US Embassy, it was with a renewed appreciation of the concept of Judgment Day — standing exposed and naked before unmovable powers, imploring every god, man, and saint you're not found wanting. 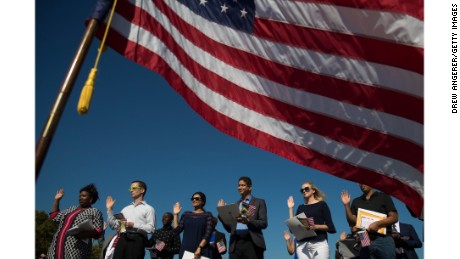 There were other moments of terror during our time in limbo. There were angry Austrians shouting as we tried hitchhiking along frozen mountain roads, and on one day my mother and older sister were detained by police for peddling matryoshki nesting dolls to locals. During those times, I would feel my parents' eyes on me. The panic in their gaze would upset me and I couldn't understand why they always focused on me. When I became an adult, it finally hit me that during those six months of being stateless, they, just like other migrants, lost the ability to protect their children. The journey to America exacts many prices, but for a parent, that's perhaps the costliest. But that's not to say there wasn't laughter and dancing as well. Refugee camps and migrant shelters crackle with gallows humor seen among soldiers and emergency room personnel — people who live at that strange intersection of the horrific and the absurdly hilarious. I remember dancing on New Year's Eve because someone got their hands on a tape deck and declared there was no reason we couldn't ring in the New Year just like everyone else. The Austrian hotel owner supervising the camp got into the spirit by giving us an extra meal and handing out chocolates for dessert. The tape deck spat out songs in a language we didn't know. One woman told anyone who'd listen she was going to open a chic hat boutique in Brooklyn. A pair of red-headed brothers huddled together making plans for a plumbing business in case they ever made it to Detroit. And almost everyone danced. We danced to stay human. We laughed because it beat back despair. And we dreamt of America because America gives people new lives, and we were all in the market for one.