The challenge is especially daunting in Bay County, where schools are closed until further notice, the Florida Department of Education's website said Sunday. "I would say every single school in Bay County has some type of damage, some more extensive than others," said Steve Moss, vice chairman of Bay District School Board. "Some it'll probably take weeks or months to get online. Some it will take years. "The only thing left of some of our schools … is the foundation." Moss told CNN he and his colleagues are working to come up with a plan to get thousands of students back in the classroom as soon as possible."We basically have 26,000 students here in Bay County," he said. "They still need educational services. They still need to learn." High school seniors have been told they will be able to graduate, Moss said. Younger students won't be held back from the next grade. "Now, to be able to do that, they have to been in a classroom setting," according to state law, Moss said, with the wreckage of Jinks Middle School's gymnasium in Panama City, Florida, behind him. It was just renovated last month, with a new floor and lighting, Moss said. But now the gym's interior is completely exposed to the elements and the floor is littered with debris. Bay County's school officials are holding a meeting Monday morning to discuss how to get students back in classrooms, Moss said.

Reopening schools is more 'critical' than some think

Craig Fugate, a former administrator of the Federal Emergency Management Agency, stressed the importance of getting schools up and running after a storm. "Getting schools open … is far more critical than most people realize," he said in an interview with CNN last year.When kids can't go to school, some parents have to stay home and can't work. And for some low-income families, school is where kids get nutritious meals. For some students, school is "their safe place," Moss said. Some are living in shelters now. Some have discovered their homes were destroyed. And now the only other place they could turn to is gone, Moss said. "Psychologically, we're really working on how best to address this with our students." Jinks Middle School Principal Britt Smith choked up when he looked at images of the damaged gym last week. But he was also concerned about the emotional and psychological impact the disaster could have on the students. "We have contractors that will come in and rebuild the homes," Smith said. "We (have to) rebuild the kids and their emotional well-being."

Bay School District officials are considering split sessions for high school students on campuses that escaped relatively unscathed. One high school would hold classes in the morning, and another in the afternoon. "We're kind of in uncharted territory," Moss said. He said most of the district's buses remain undamaged, so they could be used to get students from one school to another. But logistically, that's a "big job." 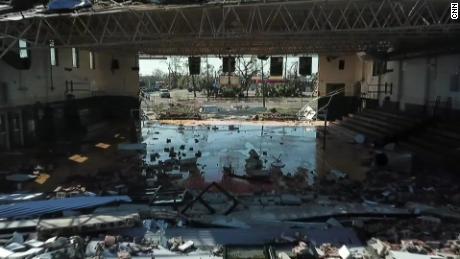 Fugate, who is also a former director of Florida's Emergency Management Division, told CNN last year that officials took a similar tactic after Hurricane Charley in 2004. "You can use other schools," he said. "Getting schools back to normal wasn't the mission. Getting kids back in schools was." Moss also recognized Hurricane Michael's heavy financial burden. "We did have somewhat of a contingency, a reserve fund to cover this, but not on this level," he said. "I don't think there's any district probably in the state of Florida that would have this type of reserve to plan for something like this."

CNN's Meridith Edwards and Holly Yan contributed to this report.