Karen Monahan, the former girlfriend of Democratic Rep. Keith Ellison who has accused him of domestic abuse, on Saturday posted on Facebook several screenshots of messages she allegedly received from the congressman in 2017.

“After I realized this situation was narcissist abuse, I told him I now understood the dynamics of the relationship and the various forms of abuse,” Monahan wrote via Facebook. “He would call that bickering when he was called out. But he still left messages like this throughout the whole year of 2017.”

“Karen, if you miss me and want me back, I am willing to try again,” Ellison wrote in February 2017. “I will make it clear that you are my ONE and ONLY. But if you dont want me back, then whats the point of all of the bickering? Calling me names?”

“Sufferers of whats called narcissistic personality disorder arent just vain; theyre grandiose about themselves to the point of obsession, charmingly manipulative, and often have a sociopathic lack of empathy towards others,” read a message from March 1.

Another message from February 2017 expressed how much he missed Monahan and promised to “seriously consider” the “narcissism thing,” although Ellison still didnt think it applied to him. 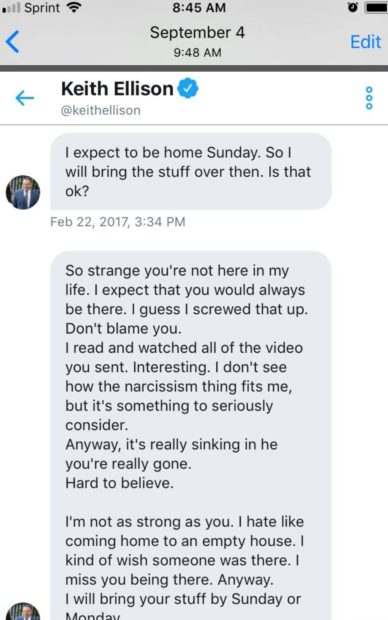 “I expect to be home Sunday. So I will bring the stuff over then. Is that ok?”

“So strange youre not here in my life,” he wrote. “I expect that you would always be there. I guess I screwed that up. Dont blame you. I read and watched all the video you sent. Interesting. I dont see how the narcissism thing fits me, but its something to seriously consider. Anyway, its really sinking in he youre really gone. Hard to believe. Im not as strong as you. I hate like coming home to an empty house. I kind of wish someone was there. I miss you being there. Anyway. I will bring your stuff by Sunday or Monday.” 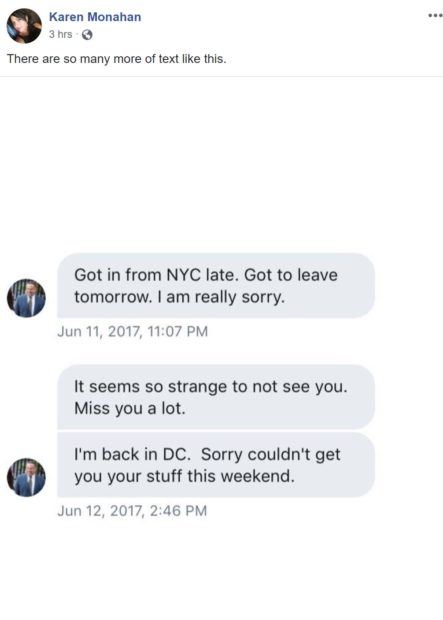 “Got in from NYC late. Got to leave tomorrow. I am really sorry,” wrote Ellison.

From a message series in June:

“It seems so strange to not see you. Miss you a lot.”

“Im back in DC. Sorry couldnt get you your stuff this weekend.”

During a Minnesota attorney general debate on Friday, Ellison again denied Monahans allegations against him, but also expressed uncertainty as to what others “might cook up.”

“In this political environment, I dont know what somebody might cook up,” Ellison said during the debate. “But I can tell you that there is absolutely nobody that Im aware of … whos threatening or suggesting or has ever made a prior accusation.” (RELATED: KEITH ELLISON DEFENDS HIMSELF AGAINST ALLEGATIONS OF ABUSE, SAYS HES NOT SURE WHAT OTHERS MAY COOK UP)

People who struggled for ensuring poll victory must be made to feel valuable part of govt: Sachin Pilot