Explore Some of Europe’s Most Beautiful Towns

This week, Dutch activists plastered new signs on 43 streets across the Netherlands, unofficially renaming them to honor the legacies of prominent women in sports, television, politics and activism. "And, of course, Beyoncé," said Santi van den Toorn, one of the leaders behind the movement and the co-founder of De Bovengrondse, an activist group working toward gender equality. Toorn can think of one homeowner who might be affected by the new signage: Justin Bieber, who bought an Amsterdam apartment in 2016. She laughs when she realizes he might be one of the newest residents of Beyoncé Boulevard — "I hadn't even thought about that," she said.Bright blue with white font, the new street signs can be spotted in 11 different cities throughout the Netherlands, hanging beneath the originals. Besides Beyoncé, some of the other women with signs in their honor include Suze Groeneweg, the first woman elected into the Dutch parliament, and Mies Bouwman, a Dutch television presenter. The movement began in March, in response to a new study published by the Dutch news website De correspondent, which found that, out of three cities examined across the Nethlerlands, 88% of streets are named after men. "In light of this, we wanted to raise awareness that inequality still exists across many aspects of society," Toorn told CNN, "and often we don't even think about it or realize."

Deciding the names for the signs

There were about 30 activists who helped with the new sign installations, Toorn said. Most of them are female. When deciding where to post the new signs, Toorn said she wanted to be mindful of the existing street names honoring people who have made important contributions to society. "'Try not to rename the people who did really nice stuff,'" she remembered telling the teams. Toorn said they tried to pick busy areas around the Netherlands where the signs would be widely seen, settling on some of the country's biggest cities like Amsterdam, Rotterdam and The Hague. 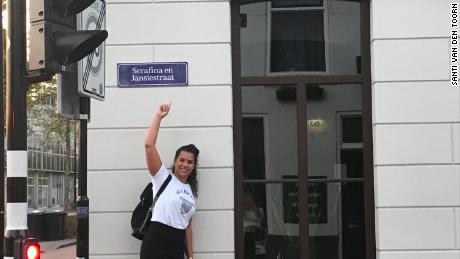 In addition to drawing millions of tourists a year, these cities contain government offices and residential neighborhoods. Deciding on which women would get street signs was a much more deliberative process, Toorn said, since picking a diverse set of women was a priority. "We had a research team who put together a list of 150 inspirational women who reflected the values of our movement, and then we narrowed this down to 12 names," she said."And we picked 12 women for the 12%."

The movement is working

Though the response has been overwhelmingly positive, Toorn said she's heard from people unhappy with the project. They've already been notified by the government that, though the idea is appreciated, signs in certain areas will be taken down, she said. "When you do something that's labeled as feminist, you're going to get opposition," Toorn said. But this project was never about replacing men, Toorn said. Really, their mission was to give government officials options when it comes time to name future streets, reminding them that there are plenty of women that deserve to be considered. And it's working. Toorn said they've already received emails from government officials thanking them for the demonstration, saying that the next time an opportunity for street naming comes up, they'll take these suggestions into account. "That's been the goal," she said. "I'm really happy, I think we did something good."And if Beyoncé happened reach out about some of her new namesakes?"That'd be amazing."

Taiwan by bike: Around the island in 12 days

Censorship board brands ‘This is Nigeria’ lyrics vulgar

Censorship board brands 'This is Nigeria' lyrics vulgar

What will quantum computing do for banking? JP Morgan’s about to find out

US takes step toward a bruising antitrust battle with Google