Troops from various nations serving in South Korea under the United Nations Command (UNC) presented an honor guard before the plane, as white-gloved troops in different uniforms descended the ramp of the US Air Force C-17, carefully holding cases wrapped in the UN flag.The cases were transferred to silver minivans waiting on the runway. 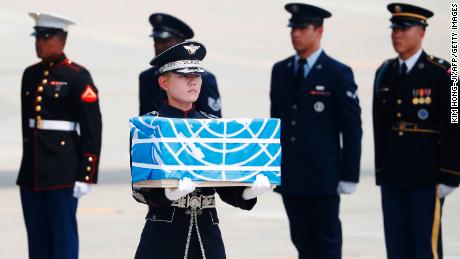 President Donald Trump said Friday that Vice President Mike Pence will greet the remains of US service members returning to the US."These incredible American heroes will soon lay at rest on sacred American soil," Trump said.The C-17 had left Osan Air Base earlier Friday to fly to the city of Wonsan, North Korea, before completing the return journey, the White House said in a statement. 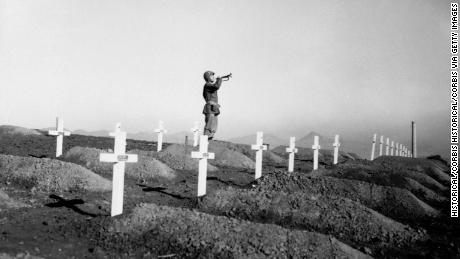 In Wonsan, North Koreans turned over what they say are an initial 55 cases holding remains, a US official told CNN. North Korean officials handed over the probable remains on the anniversary of the signing of the armistice that ended the conflict, which claimed the lives of tens of thousands of Americans, more than 600,000 Chinese, 600,000 Korean soldiers and more than a million Korean civilians.It may take months of detailed DNA analysis to determine how many American service members can be identified. In a tweet, Trump described the return of the remains as a "great moment for so many families," and thanked Kim.Secretary of Defense James Mattis said Friday that the "coordination effort over the last month" that led to the return of the remains has set a "positive tone for other things, more important things." Each case of remains was to be opened and photographed in North Korea before being transferred. US forensics specialists are to conduct a more in-depth assessment of the remains, as well as an examination of any military uniform, identification tags or documentation at Osan Air Base. That review could take five days."It was a successful mission following extensive coordination," said UNC and US Forces Korea (USFK) commander, Gen. Vincent K. Brooks. "Now, we will prepare to honor our fallen before they continue on their journey home."Brooks will host a full honors ceremony, on Wednesday, before the remains are flown to a US military laboratory in Hawaii for DNA analysis. The South Koreans welcomed the move from North Korea as a "humanitarian measure that can help heal the pain of the Korean War veterans who were not able to return home for more than half a century and their bereaved families.""The South Korean government will continue to consult with the North so that (the remains of) our soldiers killed during the Korean War can return to their families as soon as possible through a joint search for remains," South Korea's Foreign Ministry said in a statement. 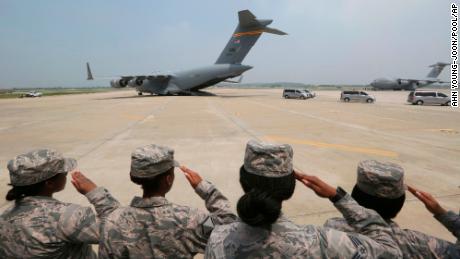 The return of the remains was one commitment North Korean leader Kim made when he met June 12 with Trump in Singapore. The transfer had been repeatedly delayed since then. At one point, North Korean officials canceled a meeting with American counterparts to discuss the handover. Even early Friday, there was uncertainty over whether the transfer would occur.With the return of the remains, the onus shifts to Trump. The North Koreans could now argue that they have begun to fulfill their part of the bargain struck in Singapore and are looking for the United States to move faster to fulfill its portion of the agreement."Today, the Chairman is fulfilling part of the commitment he made to the President to return our fallen American service members," the White House statement said. "We are encouraged by North Korea's actions and the momentum for positive change." 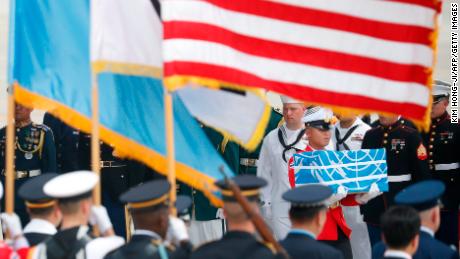 "This repatriation is an action based on the agreement between the leaders at the June 12 North Korea-US summit, (we) assess that this is a meaningful step that can contribute to the building of trust between the two sides," said the South Korean Foreign Ministry. "(We) hope the efforts of the involved parties to promote peace and stability on the Korean Peninsula will be further accelerated."There are thousands of Americans who remain unaccounted for after the war, which began when the North invaded the South in 1950. A number of US war dead are believed to be buried in mass graves in North Korea, not far from the border with the South.Many US families have been waiting on closure for decades, not knowing what became of their loved ones. Since 1990, North Korea has only repatriated the remains of 340."(My father's) bones are still here in the North with the many that died there. That they weren't able to recover," Ruth Hebert, whose father died in the Korean War, told CNN.Korea was divided into two parts under Japanese rule before and during World War II. After the Japanese surrender, the Soviet Union occupied the area north of the 38th parallel and the United States occupied the south until 1948.Of the nearly 8,000 Americans who were killed in battle, missing or captured, more than 5,000 of them were believed to be in North Korea.

Taiwan by bike: Around the island in 12 days

Labourer held over rape and murder of woman in Sabah