This is not how Puerto Rico usually does Christmas

This story, which originally published on November 23, has been updated.A year ago, the Morales clan kicked off the holidays in Yabucoa with a large outdoor gathering that included turkey and a traditional pig roast. It's an example of the importance Puerto Ricans place on the Christmas season, when family feasts and roving parties known as parrandas happen seemingly every week.But this year is different."This year there will be no Christmas," says Morales, who is 74 and legally blind. "Those who can will enjoy the holidays. We can't. We'll be here. Living in fear, in danger."Up the road, his sister Paula Morales, 67, sits in a plastic chair — one of two pieces of furniture in her living room — under the blue plastic tarp that has replaced her roof. A small painting of a clown, one of the few things she salvaged after the storm, hangs on the wall.At night, Morales (pictured above) sits by candlelight or the glare of her battery-operated lamp and listens to the crashing waves. Most of her belongings lie in a pile outside what's left of her cinder block house."I can't think about the holidays right now," she says, eating white rice and red beans from a small plate. "I have too many worries."

A marathon season of revelry

For many Puerto Ricans,a marathon season of revelry started with Thanksgiving and ends around January 6 with Three Kings' Day, when families hold festive gatherings and children leave shoe boxes full of grass — the equivalent of cookies for Santa — for the wise men's camels."The way we celebrate … is not (just) Thanksgiving and Christmas and New Year's," said Cynthia García Coll, an educational psychologist who lives in Dorado, near the capital of San Juan."It's every weekend. You have cousins on another part of the island. So the next weekend the whole family goes to the other side of the island."Hurricane Maria's assault on the island has changed all that. Head of Puerto Rico's electric power authority resignsMuch of this US territory, from urban centers to rural hamlets, still lacks electricity and running water. Even San Juan suffers occasional blackouts caused by the destruction of an outdated power grid. The storm hammered an island whose 3.4 million citizens were already grappling with unemployment and poverty.Reminders of the devastation are everywhere. Still-damp piles of debris and personal belongings lost to the storm. Downed utility poles and trees. Shuttered schools and businesses. There is the incessant buzz of emergency generators, and the constant smell of the diesel fuel that powers them. Blue, government-issued tarps cover damaged roofs like a network of Band-Aids.Puerto Rico's uncounted Hurricane Maria deathsSo this holiday season, as their fellow Americans on the mainlandexchange gifts and herald a new year, many Puerto Ricans struggle just to feed and shelter themselves."With Maria, the foundations of society — the wheels — fell off," says Dr. Domingo Marqués, a clinical psychologist who lives in San Juan. The holiday season, instead of being festive, will be "a reminder that we are still victims," adds Marqués, whose family was without power until two weeks before Christmas. "The holidays will be a trigger for trauma for a lot of people. I'm really worried about that. "How are you going to feel if you can't give your family a holiday?"

For weeks, signs of the holiday season have blossomed across the island like the green shoots sprouting on trees stripped bare by Maria. Colorful holiday signs and tinsel trees adorn homes and businesses. Folksy Christmas songs blare from car radios. Despite their hardships, some Puerto Ricans are trying to stay positive. "There is no going back to normal. It's not going to be like before. And that's not necessarily a bad thing," Marqués says. "We're going to be more resilient. My son and my daughter are going to be stronger than they were supposed to be. We're going to have more pride as a country. We're going to be better." 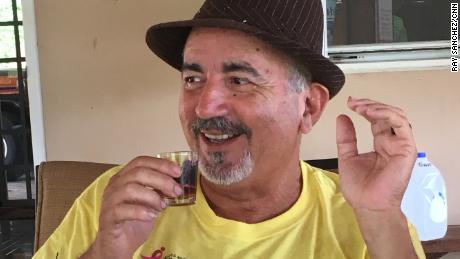 Musician Roberto Silva, one of the island's leading backcountry troubadours, agrees. "This could be the Christmas that moves Puerto Rico forward," he said. "The FEMA tarps are covering up a terrible social and economic crisis. We have to find a place between pain and happiness."The devastation wrought by Maria has even affluent Puerto Ricans unsure about how or what to celebrate. "We're dreading the holidays," said García Coll, the psychologist, who works in San Juan. Even deciding on a place for Thanksgiving dinner for about 30 extended family members was a problem."Nobody has water," she said. "Nobody has electricity stable enough to be able to do it. We are the privileged ones. We have much more than the rest of the island."This year, the hum of an electrical generators will be the backdrop of her family's Christmas celebration, García Coll said.They agreed to exchange only gifts manufactured and sold on the island. "It will be a different Christmas, but we would not be anywhere else," she said.Americans haven't forgotten about Puerto Rico, poll findsThe holiday season in Puerto Rico is typically marked by parrandas, a tradition similar to Christmas caroling in which families and friends gather and move from house to house, singing and dancing. The roving carolers can arrive unexpectedly at all hours and often come inside to eat and drink before taking the party to the next home. Those celebrations have been more muted this year. García Coll said the season has been subdued so far, even on what used to be lively weekend nights. "Many families are really struggling," she said. "How can you celebrate when there are so many of us suffering?" Still, many Puerto Ricans held traditional parrandas in recent weeks. Marqués says co-workers at the graduate school of psychology where he teaches took the roaming parties to rural mountain towns. 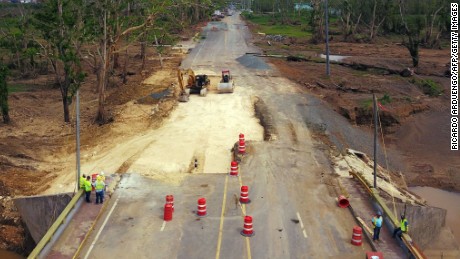 His co-workersraised money to donate solar lanterns and water filtration systems to people in the countryside, he says. They distributed toys to needy children. "They deserve it," he says of hurricane survivors in remote parts of the island. "We're the quote-unquote 'privileged ones.'… The people in the mountains, in isolated communities, they feel betrayed. They feel angry. The government is not there."

In Comerío, a town in the mountains of central Puerto Rico, a driving rain did not stop hundreds of residents from kicking off the holiday season last month with a pre-Thanksgiving feast of roast pork, yellow rice and pigeon peas.SOMOS Healthcare, a New York-based nonprofit, sponsored the meal and set up permanent clinics in two remote towns hit hard by Maria."More than ever, there is a need for the holidays," says Jose Antonio Santiago, Comerío's mayor. "There is a collective depression that comes from a lack of the most basic necessities."The first emergency roof tarps from the Federal Emergency Management Agency did not arrive in town until nearly two months after Maria hit on September 20, Santiago says. More than 1,600 homes in the town had roofs damaged or blown away entirely, he says. More than 500 people remain in shelters throughout the island, according to the government. But Santiago says that figure doesn't take into account the large number of displaced residents not living in shelters."I have some 5,000 refugees," he says. "You don't see them because they're staying with relatives, friends and neighbors. That's two and three families in one house without light or water."UN experts blast US disaster response in Puerto RicoSantiago said brigades working to restore power on the island had yet to arrive in Comerío, a mere 27 miles southwest of San Juan."The slow recovery has led to emotional fatigue," he says. "The official figures do not reflect the reality on the ground."

'This Christmas will be different'

A short distance to the northwest, in the hilly town of Corozal, 12-year-old Ian Nieves sits in the elementary school that has sheltered his family since Hurricane Maria hit. He covers his eyes, fighting back tears, as he tries to recall his blessings this holiday season."This Christmas will be different than all others," he says. Ian and his brother Elian, 6, cannot return to their nearby home, which sits on a hillside vulnerable to mudslides and remains badly damaged. 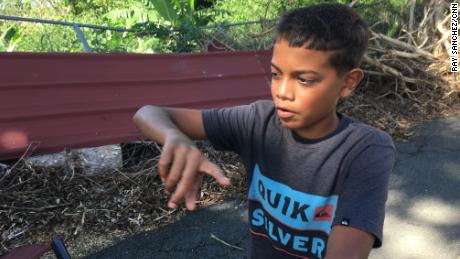 Their school is still closed, so the boys spend their days riding bicycles, shooting hoops in the hot sun and playing a Teenage Mutant Ninja Turtles board game. Their great-grandmother prepares breakfast, lunch and dinner in a corner of the classroom she now calls home. "I miss home so much," Elian says.Ian recalls last year's holiday season, the parrandas and the large spreads of food that included traditional desserts of arroz con leche, rice cooked with coconut milk, sugar and spices, and a coconut milk custard known as tembleque. "We had the whole family together," he says. National historic site in Puerto Rico reopens after hurricaneThe boys also miss three of their cousins — ages 6, 9, 13 — who lived down the street but left the island for Pennsylvania about a month after the storm. Many Puerto Ricans have fled in recent weeks to stay with relatives or in hotels on the mainland."I cried so much that day," Elian says. "I don't know when they'll be back." 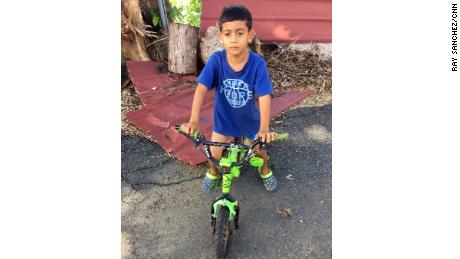 Ian says he hopes to get new clothes for Christmas. Elian wants a scooter and a juice mug to replace the one — it was yellow, with a smiley face — he lost in the hurricane. The younger boy says he recently received a donation of new clothing and shoes but gave some away to friends who needed them more. "They have nothing," he says. "They lost it all in the storm."

Across the island in Yabucoa, Jose Morales and his wife, Irma Torres, live down a muddy road in a yellow house where one room has no roof. The ceilings in two other rooms appear close to collapsing. And the relentless ocean waves are threatening what is left."The lower wall, by the sea, is in danger of falling,"says Morales, a former fisherman who lost his eyesight 12 years ago. "It scares me at night. I hear the waves hitting it. I feel it." 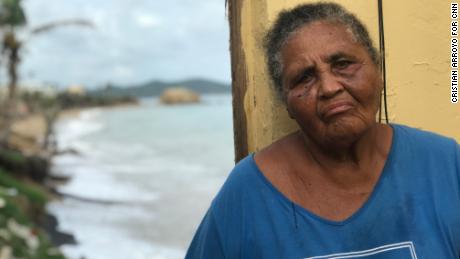 The couple have no place else to go. They live on about $300 a month in food stamps and Social Security benefits. And like the rest of their family nearby, they have been subsisting on rice and cans of Vienna sausage, corned beef and sardines.Torres asks a reporter if she could borrow his phone to call a nephew in Connecticut. When she hears her nephew's voice on the phone, she starts crying."God bless you," she tells him. "You know I love you very much."She's surprised to learn it's her nephew's birthday. She didn't know. She asks him to visit soon, and to bring cake and medicine for her respiratory disorder."We've been waiting for FEMA," she says to him. "Please come see me. … Give my best to your mother. I love you." After she hangs up, Torres manages a smile. It's her first in a while.

The post This is not how Puerto Rico usually does Christmas appeared first on News Wire Now.

Lance Armstrong: Some of the Chris Froome fallout is my fault

Walmart Bets on Convenience and Technology to Grow in Latin America