The parties' leaders will meet at Steinmeier's official residence in Berlin to discuss "the situation after the breakdown of the coalition talks."The announcement comes five days after the collapse of negotiations between Merkel's alliance of the Christian Democratic Union and the Christian Social Union, the pro-business Free Democrats and the Green Party and marks a significant retreat from the Social Democratic Party's (SPD) earlier refusal to enter talks with Merkel or to seek a renewal of the so-called grand coalition of the past four years.Indications of a shift came when SPD General Secretary Hubertus Heil told reporters late Thursday that the party "is convinced that discussions must be held… the SPD will not rule out talks."His cautious language was echoed on Friday morning by SPD deputy leader Manuela Schwesig, who said that a new coalition government was no certainty."Just because one says that one is open to talks, that doesn't automatically mean a conversation about a grand coalition and even less a vote for a grand coalition," she told public broadcaster ZDF.Merkel's alliance and the SPD suffered significant losses in September's federal election. After Martin Schulz, the SPD's leader, ruled out another grand coalition — citing the need to rebuild his party and an unwillingness to leave the far-right Alternative for Germany as the largest opposition group in Parliament — few viable coalition options remained.READ MORE: What next for Germany as Merkel myth implodes?On Monday, less than 24 hours after the discussions broke down, Schulz repeated his refusal to enter talks, arguing that "the grand coalition got the red card" in September's elections and suggesting his party was open to new elections instead.Although some party members publicly backed Schulz, others questioned his hardline stance.Schulz has also come under fire from CDU politicians who consider a new grand coalition a better option than a minority government or new elections — both unprecedented in postwar Germany. 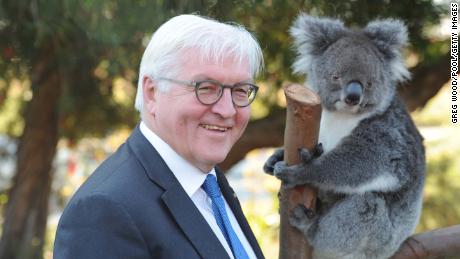 "The SPD must now consider whether it is going to remain maliciously in the corner, as we've seen in the last days and weeks, or whether it wants to take responsibility for this country and for Europe," CDU lawmaker Jens Spahn said Monday.But if the SPD does begin official talks with Merkel and her alliance, it's unlikely Schulz will have the backing of his whole party.Just a few hours before Heil addressed the press, Heiko Maas, an SPD parliamentarian and Germany's justice minister, argued against a renewed CDU/SPD coalition on ZDF's political talk show "maybrit illner.""It is not the SPD that is responsible for this situation," he said. "We are not Mrs. Merkel's 'German Life Saving Association', always heading out to save her from drowning."Maas did acknowledge, however, that talks were likely to happen and said that avoiding them entirely would be "childish".

Emmerson Mnangawa is sworn in as interim President

What is it like to hang out with gorillas in the forests of Rwanda?

What is it like to hang out with gorillas in the forests of Rwanda?

Vonn has her say about US President Donald Trump