Deal means former president and his wife can stay in Zimbabwe

Col. Overson Mugwisi, a spokesman for the Zimbabwean Defense Forces, told CNN that an agreement had been reached with Mugabe that included immunity and a guarantee of safety for the former leader and his wife, Grace Mugabe.Mugabe resigned on Tuesday, in a historic moment that brought his 37 years of oppressive rule to an end. The former leader has been accused of ordering a string of massacres in the early to mid-1980s in opposition strongholds to consolidate his power, in which up to 20,000 people were killed. He has also long been accused of corruption to finance his lavish lifestyle, as his government drove the once-prosperous nation into economic ruin and poverty. MORE: The devastating economic legacy of Robert MugabeMugabe had spent a week negotiating his departure with the military since the country's army seized control in the capital, Harare, and placed the leader under house arrest. In a long, drawn-out process, frustrated military officials gave into the demands for immunity and allowed the president to keep several of his properties, sources told CNN on Monday, before Mugabe stepped down.Mugabe's former right-hand man, Emmerson Mnangagwa, returned to the country on Wednesday to take the reins as interim president, promising to take the country into a "new and unfolding democracy." He spoke in front of throngs of supporters, but made no mention of Mugabe's future.

Calls for free and fair elections 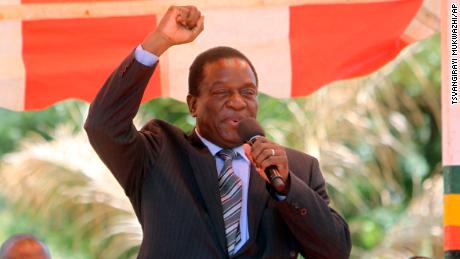 Mnangagwa's return has raised a sense of nervousness in Zimbabwe — he is alleged to have been behind some of Mugabe's most ruthless policies and to many he represents the oppressive status quo.Known as "The Crocodile" for his political cunning and longevity, he is accused of orchestrating the massacres in the 1980s, an allegation he denies. He said in remarks on Wednesday that he was in "constant contact" with military officials during its operation to remove Mugabe, raising concerns that he could use the armed services to run a campaign of fear ahead of elections next year. The main opposition MDC-T party, led by Morgan Tsvangirai, has called on the security services to return to an apolitical stance. "In line with the constitution we demand that the security services including the army must not play any part in the electoral processes except the maintenance of law and order," MDC-T Secretary General Douglas Mwonzora said in a statement. He also called for "free and fair elections" monitored by the United Nations, and he urged all Zimbabweans to register to vote. Mugabe kept his iron grip on power for nearly four decades by rigging elections, it is widely alleged.

MS-13 gang ‘beheads man and rips out his heart’

Grace Mugabe could stand trial for assault after immunity revoked